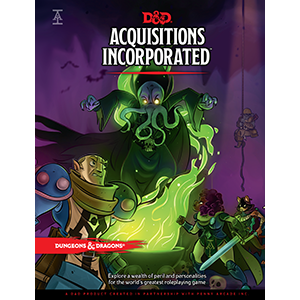 Explore a wealth of peril and personalities for the world’s greatest roleplaying game.

When you’re just starting out in the adventuring business, it might be nice to have a leg up. It can be a big help to have access to the powerful artifacts, expertise, and jobs that Acquisitions Incorporated (Acq Inc) has to offer a new franchise. Join Omin Dran, Jim Darkmagic, and Viari like never before with the new Acquisitions Incorporated campaign book for Dungeons & Dragons!

Set yourself up for success when pursuing your own fantasy-business endeavors, using all the ingredients you need to include Acquisitions Incorporated in your D&D campaign, to establish your own franchise, and take on specialized roles therein. Plus, there are always openings coming available… Just try not to think about why.

At PAX East, Penny Arcade’s Jerry Holkins and Elyssa Grant were on a panel moderated by D&D Game Designer Kate Welch (Rosie Beestinger herself) to talk about the type of madcap fun D&D fans will get up to when the book drops June 18. Check out video from that panel here on Twitch.