The Reaver The Sundering, Book IV By Richard Lee Byers 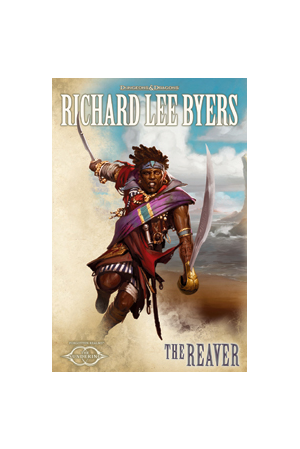 In the 4th book of the multi-author Sundering series launched by New York Times best-selling author R.A. Salvatore, Richard Lee Byers introduces Anton Marivaldi—a renowned reaver with an insatiable thirst for bounty and a moral compass that always leads him toward the evil he’s never tried.

Endless, pounding rain afflict the Sea of Fallen Stars and the coastal regions surrounding it. Harvests are failing, travel and trade are disrupted, and civilized forces are giving way to the deluges caused by the storms. In panic and despair, many have turned to the goddess Umberlee, Queen of the Deeps, offering her sacrifices with hope that they will be spared the inevitable reckoning of her perpetual tempest.

Evendur Highcastle, undead pirate captain, risen from the depths to assume the mantle of Umberlee’s Chosen, takes advantage of the people's desperation to strike for both spiritual and temporal power in her name.

Richard Lee Byers is the author of over thirty fantasy and horror novels, including a number set in the Forgotten Realms universe. A resident of the Tampa Bay area, the setting for many of his horror stories, he spends much of his free time fencing and playing poker. Friend him on Facebook, Follow him on Twitter, and read his blog on Livejournal.