Night of the Hunter Companions Codex, Book I By R.A. Salvatore 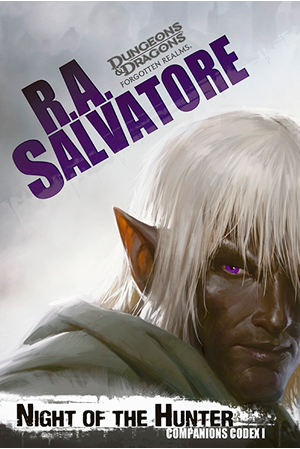 R.A. Salvatore's New York Times best-selling saga continues as Drizzt Do'Urden and the Companions of the Hall join forces in an adventure filled with drow intrigue, the likes of which have not been seen in Salvatore's work since the hugely successful the War of the Spider Queen series.

With faithful friends by his side once again, Drizzt Do'Urden returns to Gauntlgrym, to find and turn Pwent, Bruenor's loyal shield dwarf, from vampire back to mortal once again. But not only do he and his cohorts face a perilous journey through the Underdark and the dangers of the undead that lie within, but in order to do so, they must face a colony of drow and their leader, who would like nothing better than to see Drizzt Do'Urden dead.