A community is terrorized by a horror lurking in a distant farmhouse.

“I write science fiction, fantasy, dark fantasy, and horror fiction, and my journey into writing for tabletop came via my work in speculative prose and interactive fiction,” says Erin Roberts. Having created TTRPG content for a couple of years while writing an official fifth edition Dungeons & Dragons setting and adventure in Journeys Through the Radiant Citadel, she’s sometimes surprised by how much she’s taken to the field. “I've kept a running total of how many words I've written for tabletop. When I have those moments where I wonder ‘Am I even working?’ I can make myself feel better by opening that spreadsheet and realizing I've reached over 70,000 words since I started.”

Erin reveals that her African diaspora-inspired land in Journeys through the Radiant Citadel is closer to home than people might imagine. The region of Godsbreath she introduces in the sourcebook is inspired in part by her family’s history in the Southern United States.

“Much of my family tree is rooted in the South of the United States so I immediately knew that I wanted to draw from that aspect of the African diaspora,” she says. “One of the big touchpoints for me as I wrote was the book Growing Up Black in Rural Mississippi, which was written by my great uncle and traces the story of my extended family in rural Mississippi in the early to mid-1900s.

“I wanted to create a big region to explore but my adventure is horror, and horror stories are often very small and personal, especially when in the Southern Gothic tradition. One of the decisions I made in the adventure is that the characters have to travel and they have the opportunity to be accompanied by NPCs, so players get to experience this region and its different groups. It was a way to show off Godsbreath’s varied aspects while still telling this focused creepy tale.” 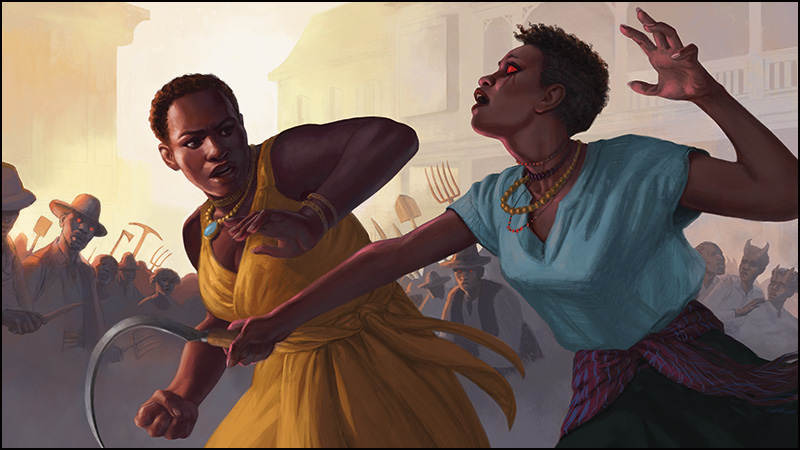 One of those potential companions is a Proclaimer of the Covenant. Erin describes these individuals as travelling preachers that collect and expand on the history of Godsbreath using oral storytelling.

“Proclaimers are a little bit cleric, a little bit bard. They worship the covenant of gods that brought everyone to Godsbreath to save them from attack generations ago. Their job is to go out and find stories about Godsbreath’s people to add to the Awakening Song, which is performed at a yearly festival,” Erin explains.

“I loved incorporating oral tradition into Godsbreath. I grew up with lots of stories about life in the South that were passed down by being told around the table or at a family reunion. I love that Godsbreath draws both from those stories, and from the fact one of my relatives took stories that might traditionally be passed down orally and wrote them down. Either way, words have power.

“I wanted to make the oral history of Godsbreath into a song in an homage to the work songs and call-and-response songs that are part of the Black musical tradition of the South. Gathering to sing the Awakening Song is a great way for the inhabitants of Godsbreath to come together once a year, find out what’s everybody’s been up to, and retain their sense of community.”

Stories are the glue that binds Godsbreath together, Erin’s gazetteer tells us. And you can bet the proclaimers know how important their work is, and the power they wield deciding whose stories make it into the Awakening Song.

“Proclaimers are travelling around, sharing their words, and taking stories back with them. But you don't want to make a Proclaimer angry, because then your accomplishments will probably not be captured for the long-term. Proclaimer Tungsten Ward, who we run into during the adventure, definitely knows how much power their decisions have,” Erin shares, adding that she can’t wait to see someone play a Proclaimer of the Covenant and head off into the D&D multiverse.

“A player could be out there trying to capture stories for the Awakening Song and decide that they want to go beyond the realm of Godsbreath to sample more of the world for this oral history. It would be interesting for them to find out that nobody knows about the Awakening Song outside of Godsbreath. It might affect their sense of power. How do they make their way in a world that doesn't traditionally have that role?”