A murderer stalks the streets during a raucous festival.

“I didn't want to get too political,” says T.K. Johnson as they discuss their adventure "Wages of Vice," which features in the fifth edition adventure anthology Journeys through the Radiant Citadel. “In spite of that, I wound up including things that are integral to my identity.”

"Wages of Vice" centers on the city of Zinda in the nation of N’wari, which is run by a plutocracy, farms a cash crop, and has a widening disparity in society.

“Zinda is a nation run by the six wealthiest guild masters, known as the Kings of Coin. It farms the jeli flower, which is a giant, black moonflower that produces the city’s most important exports—specifically the sweet jeli wine, as well as paper, fabric, and dye. However, I didn't initially equate this to farming cash crops such as sugar and cotton when I first wrote it,” T.K. admits.

Adventurers arrive in Zinda at a point when laborers are demanding greater rights. But their mission surrounds a series of attacks taking place during a dazzling and colorful festival known as the March of Vice.

“The party encounters a world with a stark divide but that's not the adventure. I wanted to give players a taste of that conflict, but it was important to me that strangers to this nation don't just step in and easily solve its biggest problem. Because its biggest problem is that the rich keep getting richer and the poor keep getting poorer, and that’s not easily resolved,” T.K. says.

“Instead, the party enters a vivid, pastel aesthetic that's incredibly bright and vibrant. The March of Vice is like Carnevale or Mardi Gras, which is traditionally where you indulge all your vices. And then, during Lent, you can repent for all those vices because you aren't allowed any. Carnevale is so named because it's the last day you can eat meat before Lent.” 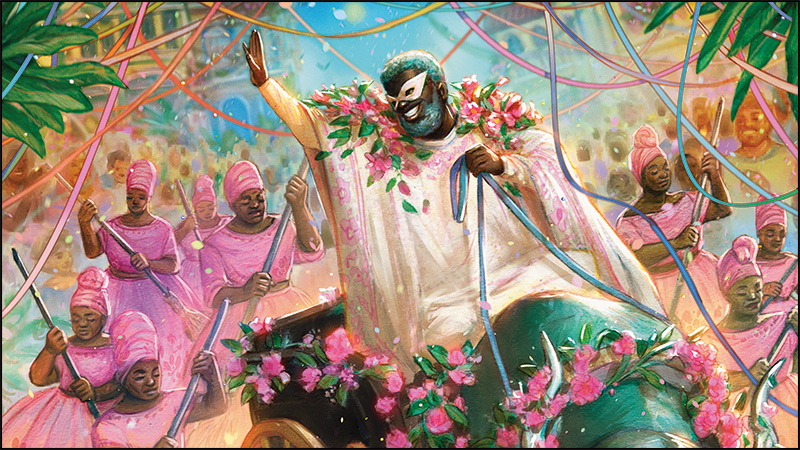 What Magic You Do

Alongside a host of Easter eggs drawn from Gullah lore and regional folk tales, T.K. Drew from their own spiritual ties to the Caribbean for Wages of Vice. They have family in Louisiana who practice Haitian folk magic and religion, similar to T.K.’s own role as an “auntie” or “root worker” practicing hoodoo, which helped flavor the creation of the datura.

“The datura who feature in "Wages of Vice" are somewhere between a ranger, a rogue, and a druid. In the adventure they're called spirit shepherds, and they essentially work with herbs as part of African spirituality. They also practice animism, which is the belief that rocks, trees, flowers, waterfalls, and other natural creations all have a spiritual echo or even nature spirits living inside them.”

T.K. was also aware that when most writers base fantasy tales in the Caribbean, they reference zombies. Keen to avoid the shambling hordes of undead traditionally associated with these creatures in Dungeons & Dragons, they took their reference from another source.

“I'm a horror writer who loves traditional zombies but I wanted these zombies to be more like the ones in the movie The Serpent and the Rainbow. Jimson weed—also known as datura, thornapple, and moonflower—is a powerful hallucinogenic that's very similar to blowfish toxin. I wanted to approach the idea of zombies in a Caribbean story as less that there are natives of the area you have to kill, and more that there are people affected by something very serious who need your help,” T.K. reveals.

To aid the artists who illustrated the adventure, the writers on Journeys through the Radiant Citadel were encouraged to create mood boards, helping decide every major character’s color palette and even what fabrics they wore. The clothing of the character Datura Kala is designed to look like those colors could have been dyed in a pot. While the character Samira Arah is dressed in a gown that makes her look wealthy, as befits her status as one of the rulers of the city. Fellow King of Coin Myx Nargis Ruba’s outfit announces them as a tavern owner with a love of luxury even before their sociable smile does the same. As fabulous as every one of these characters is, the star of the show has come dressed for the March of Vice.

“Whenever you think of Carnevale, you think of those big feather headdresses. And the first thing that popped into my head when planning the adventure were the divas. In the same way that World War II spy Mata Hari was a burlesque dancer, I see the divas as the perfect assassins,” T.K. says. “They train at the Elucidarium in Zinda, which is such a pompous and absurd name—I'm glad they let me keep it. It’s an arts college that’s also a spy school. Come for the clown class and stay for the cloak and dagger master class, with poison electives. I love the idea that someone could be playing a dope bard covered in feathers and rhinestones in their D&D game because they come from Zinda!”

Diva Luma and her troop of performers feature in a key scene in the adventure, which has been immortalized in art for Journeys through the Radiant Citadel. Amid confetti, streamers, and lanterns, the acrobatic students of the Elucidarium have come to do more than party.

“I had my friends Eugenio Vargas and Brian Gray in mind when I was writing that scenario. I wanted to write something that if they played it on Rivals of Waterdeep, they would lose their minds. The drinks are flowing and it's all glitter, stilettos, and murderous intent. I wanted it to be the deadliest and most fabulous tavern brawl that anyone’s ever experienced.”