A legendary creature reawakens and begins a chain reaction of volcanic eruptions that threaten the land.

Journeys through the Radiant Citadel co-writer Alastor Guzman has been playing Dungeons & Dragons since they purchased the D&D 3.5 Starter Set back in 2006. They still play with the same group of friends today, relishing their role as the “forever” DM. Their long history with the game has now merged with their personal passions to create the region of Tletepec that sits at the heart of their adventure, “Trail of Destruction.”

“I found a nice group to play with during the equivalent of the US seventh and eighth grade and I’m now running games for them in fifth edition. I've been the Dungeon Master since we started playing, aside from a game I played at university where the other players rotated to take their turns as DMs. But it’s a role I enjoy and that experience helps when it comes to adventure writing so I have no complaints,” Alastor says as they chat from their home in Mexico City.

“I used Aztec culture as an inspiration for my adventure and the region of Tletepec that’s accessible via the Radiant Citadel, because most of the stories and the history I grew up reading focused on that. And my experience of living in Mexico City is of a location that has to deal with natural disasters, which also influenced me. Mexico City has a volcano on its outskirts and tremors are common, with a major earthquake occurring every few years.” 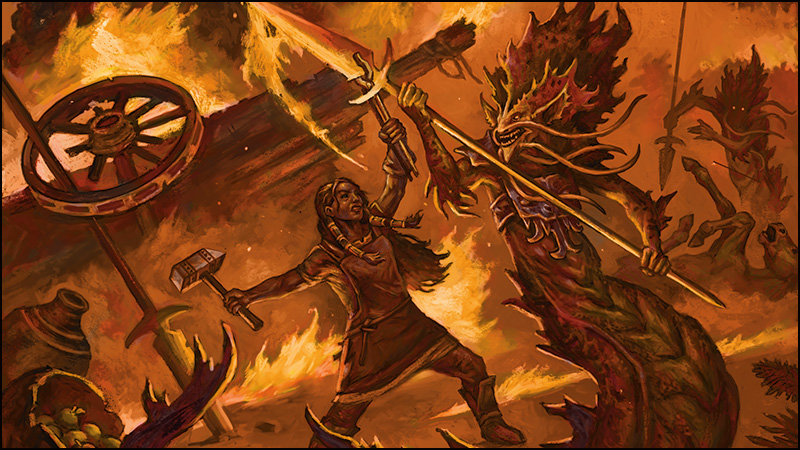 As part of their writing process, Alastor researched the real-world fallout of a major natural disaster that was close to home—the 2017 earthquake in Mexico City. It was powerful enough to bring down buildings and, in an effort to help, regular citizens volunteered their services as part of the rescue operation.

“I wanted to make a fully rounded location that wasn’t solely focused on survival and felt like people really live there. Part of the residents’ motivation may be self preservation but their main cultural focus is on being happy and easygoing and cooperating with each other. The inspiration for that came from the way people helped each other in 2017,” Alastor remembers.

“It’s a society of people who know how to take quick decisions and the players will have to do the same. This adventure is designed to push them to react swiftly, because you can't take a rest in a disaster zone. There’s an event the party experiences right at the beginning and the story moves quickly forward from there.”

Another implication within “Trail of Destruction” is that an abundance of disasters in a fantasy setting would give rise to factions connected to them. Much as our modern world employs people to predict earthquakes in an effort to minimize their impact and trains responders to deal with the aftermath, Alastor felt a fantasy setting would feature similar roles. This led to the creation of groups such as the Watchers in the Ashes, the Trail Keepers, and the Shapers of Obsidian.

“In a world where you have the concepts of magic and of communicating with the gods, you’d also have the concept of people trying to predict these major events, and that’s the Watchers in the Ashes,” Alastor says. “And when you have a constantly changing landscape, you’ll need a faction that is more focused on mapping and keeping paths across the region safe and clear, and that’s the Trail Keepers. You’re also likely to have scholars trying to use technology or magic artifacts in order to survive in these conditions, and that’s the Shapers of Obsidian.”

While these three groups may appear to have the same goals in mind, suggesting they’d work closely together, Alastor reveals that their varying methods may still put them at odds.

“These different factions aren’t necessarily evil or even against each other politically. They simply have different approaches in how they want to help people to survive. They may have the same objectives but their different methods of arriving at those objectives can still cause conflict,” they confirm.

A key element of each chapter in Journeys through the Radiant Citadel is the gazetteer that provides essential details of the world beyond the adventure. Alastor used this resource to once again take inspiration from their local culture, as well as correcting some of the misbeliefs that surround the Aztecs they grew up reading about.

“If you read the food description in the Family and Home section of the Tletepec gazetteer, it's the description of food in Mexico. It talks about spices and how to prepare molli, which is a thick, sweet-spicy sauce,” they say.

“Food is also one of the items that’s mentioned in the Offerings and Celebrations section of the gazetteer. American pop culture of Mesoamerican cultures tends to focus on the idea of human sacrifice and I wanted to steer away from that belief. Most of the offerings to the gods in Tletepec culture are well-made items or foodstuff, as people attempt to appease the gods in order to survive in these conditions.”