Rival factions clash in an angel-ruled city on the brink of rebellion.

When Justice Ramin Arman began work on Journeys Through the Radiant Citadel, he was working for Beadle & Grimm’s. Even before the adventure anthology was published, he’d turned his time in the Pandemonium Warehouse, and his work on D&D Adventurers League campaigns and a few DMs Guild projects with his good friend Anthony Joyce-Rivera, into a full-time position at Wizards of the Coast.

“I was brought onto this project in late 2020 and this was the first Dungeons & Dragons hardcover I’d ever contributed to. I was already familiar at that point with the rules about how to frame an encounter, the style guides, and what the books should look like, and those things helped me grow,” Justice shares. “I feel very lucky for this to have been my first work with Wizards. From the organization and the passion from the leads and the co-creators, to the spirit of collaboration throughout the project, it’s been great.” 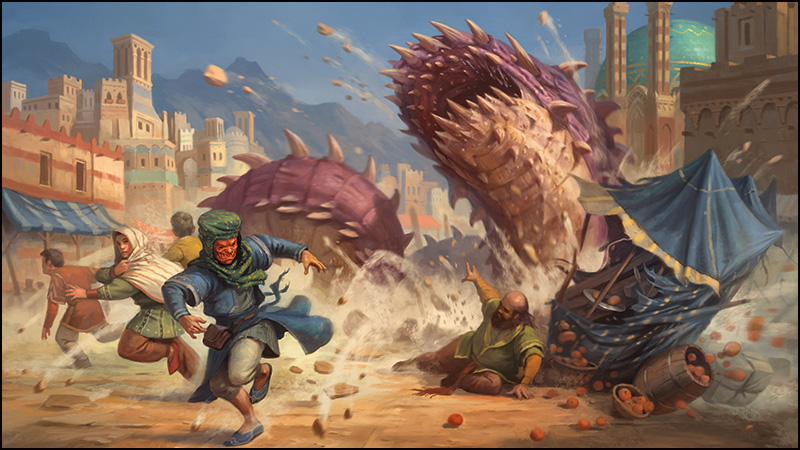 Justice has been heartened by the mainstream audience’s willingness to embrace varied cultures, citing the success of movies such as Coco, Encanto, and Raya and the Last Dragon. While some Iranian films are starting to be shown on westernized channels, most recently Asghar Farhadi’s A Hero, he’d love to open the culture up to a wider audience.

“This is a really great period to explore different societies in more mainstream media, and I wanted to show the beauty of Iranian culture. It’s distinct from other Middle Eastern/Southwest Asian cultures,” he says. “It’s very special for my first creature contribution to D&D to be inspired by Iranian mythology.”

The creature at the heart of “Shadow of the Sun” takes inspiration from a classic piece of Iranian literature called the Shahnameh, which translates as The Book of Kings. It’s an epic adventure on par with The Iliad and The Odyssey, and it contains a passage where a god, Soroush, visits a king as a pari to warn him that something bad is going to happen.

“I did a lot of research into these messengers, which are called pari. And I went back and forth on how should they should be classified in D&D, because the word pari in Persian means fairy. But in the artwork in the Shahnameh, they look and act more like angels, along with their depictions in Islamic lore. So it was a deliberate choice to have them be celestials,” he says.

“I’ve always thought celestials are cool, so it was exciting to add another angel to that hierarchy. And I found a niche between the deva and the planetar. The deva come as messengers from gods, while the planetar show up to tell you that you messed up and someone is about to flame strike you! The pari sit in between those. It’s not quite a message, it’s more like an omen. We know what’s going to happen and you need to hear us out for those reasons. They might act as advisors to a king, or they may be here to warn you to change your ways before someone upstairs cleans house.”

Alongside the mythological and historical research that informs Justice’s adventure (including armor based on the Safavid dynasty that’s appropriate to mediaeval Iran, and what he believes is the first-ever Persian carpet in D&D courtesy of Sangarian rugs), “Shadow of the Sun” also contains a number of hidden linguistic Easter eggs. For example, the name of the location, Akharin Sangar, means “the last defense,” while its temple, Avalin Sahar, translates to “the first dawn.” The Ghorbani family are closely tied to the resistance, and their surname means sacrifice, while enchanter Afsoun’s name in Persian translates to “charm” or “spell.” Some of the suggested names for the setting in the accompanying gazetteer are also taken from his own family, including his father Hassan, and his sister and aunt, who share the name Shohreh.

“One of my favorite songs by the musician Ebi is called ‘Lalehzaar,’ which means ‘field of tulips.’ It’s also the name of a street in Iran. Laleh is one of the main characters in the setting and adventure, and she’s named after that song. You’ll see that she has tulips running along her prosthetic arm,” he points out.

“Atash’s name means ‘fire,’ while Sholeh—who appears in the ‘The Radiant Citadel’ section of the book—means ‘flame,’ so there are themes of fire and light running throughout the book.”

Justice says another theme of Journeys Through the Radiant Citadel is to challenge perceptions. Not only is it designed to confront some of the characters’ perceptions and beliefs, he hopes it’ll do the same for players.

“Tabletop is a great tool for teaching empathy, because you figuratively put on somebody else’s shoes, become a character, and think about their lives and where they grew up,” he says.

“I hope that people play the adventures and see something that maybe they’ve always wanted to see in D&D. DMs and players have the tools in these fifteen new mini settings to tell more stories. If they really like a location, they can make it a part of their world.

“I hope to see a character from Mario Ortegón’s Day-of-the-Dead-inspired setting, alongside someone who grew up in the Night Market from Surena’s adventure, with maybe someone who’s ridden a manticore from my piece, all coming together to make a cool adventuring party from the Radiant Citadel.”