A conflict between rival night market vendors draws characters into a hunt for a mysterious saboteur and a series of whimsical contests.

Surena Marie is an actor and illustrator living in Los Angeles. She counts one-act plays and comedy among her credits, alongside her DMing experience—including a stint as Dungeon Master for the popular show Rivals of Waterdeep. She’s now expanded that resume by penning the opening adventure in the fifth edition D&D adventure anthology Journeys through the Radiant Citadel.

“I wrote a couple of smaller pieces a while back, and I’ve written as a DM for the show Rivals of Waterdeep, which taught me adventure structure and how to hook players into your story. But as far as writing is concerned, this is my first major work,” Surena says of her 1st and 2nd-level adventure, "Salted Legacy."

“I really enjoy 1st-level adventures because they often lend themselves to solid roleplaying, and that's what I was really excited to explore. I wanted to create an adventure that’s accessible to new players who might only just be learning the rules. My adventure is comedic and fast. You're thrust into the action right off the bat.” 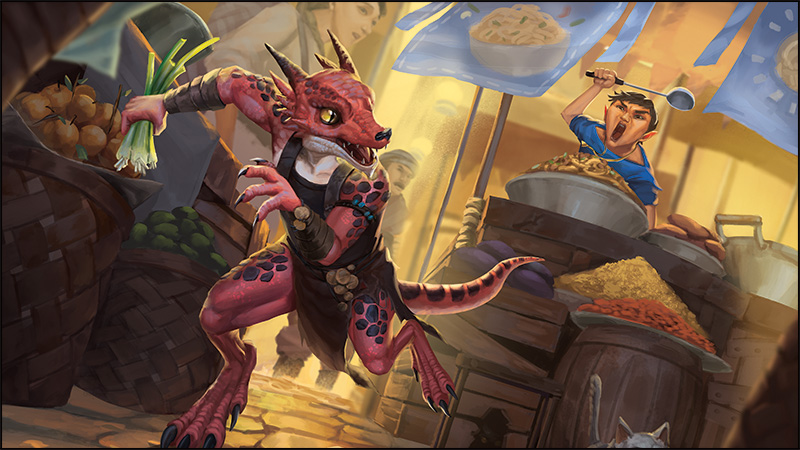 Bazaar of the Bizarre

"Salted Legacy" sees players exploring the Dyn Singh Night Market, an endlessly changing maze of stalls filled with incredible wares, enticing smells, and magical lights. At a time in their adventuring career when certain character classes might be knocked unconscious by a stiff breeze (we’re looking at you, wizard), Surena chose to challenge the party in a way that will bring them together as a team.

“By introducing a system where characters earn renown points by attempting various contests, as they strive to earn the trust of the market stall holders, they’re having fun with silly gameplay while also carrying out actions that have stakes,” she says.

Every adventure in Journeys through the Radiant Citadel expands upon a location with a dedicated gazetteer detailing a new corner of the D&D multiverse. Surena admits that writing the gazetteer was a revelation, as it brought to light her love of dispensing lore and fleshing out regions. Each adventure also pulls from the writer’s own cultural heritage, which saw Surena reference her American and Thai background.

“It was truly a joy to figure out which parts of my culture to pull from to create Siabsungkoh and the Dyn Singh Night Market,” she says. “I'm first generation in America and my mom is from Thailand. Growing up there's the push to be more American, while still holding onto your cultural values. My region is a reflection of that. The Dyn Sing Night Market is urban, it's hustle and bustle, it's expansion and industry, whereas the rest of the Siabsungkoh region is holding on to those values and traditions.

“Night markets in general are also a huge part of Thai culture—there are so many floating night markets in Bangkok. And the wonder that you experience going into a market that has almost everything for sale is pretty cool.”

Food also plays an important role in the adventure, as the families that run the Tyenmo Noodles and Xungoon Family Seafood stalls blame each other for a series of calamities. Once again, Surena drew from her personal experience, which saw her helping her mom prepare food both at home and in the community.

“Food was a big part of growing up. My mom and I would always go to temple and cook, and I'd help her cook at home too. Sundays was about big family dinners and coming together, with a mixture of Thai and American food. I feel the Dyn Singh Night Market—and in a broader sense Siabsungkoh the region—exists in finding those moments where we can share meals together. And the closest, most literal example is the Battle Prawns: The Shrimpening challenge. We're cooking together and we're doing it quickly. We have deadlines!”

Another piece of lore Surena got to add to the D&D multiverse is a new creature. During the writing process, she figured out that this didn't have to be a big bad in the traditional sense.

“Instead, I decided to make this little Franken-monster called a wynling. It's a mixture of a slow loris—which is adorable and weird and something everyone should Google—and a bat,” she explains.

“Its main defense is mischief. While it likes to play and have fun, sometimes that might lead to important things being stolen or an explorer accidentally wandering off a cliff! But I'm a player who, when encountering a monster, tries to talk to it and befriend it before I take out my sword. And a lot of the encounters in this book can be solved without violence, should players want that.”

Art of the wynling appears in Journeys through the Radiant Citadel, which also features a representation of the Battle Prawns: The Shrimpening market game (“It's such a good illustration, because it's chaos,” Surena says. “The person's face is blurred because they're screaming and running!). But "Salted Legacy" also has the honor of providing the setting for the standard cover of the book.

“We had talked about a couple of cover options, and I was just happy to be considered,” she says modestly. “Then when they decided it would be the Dyn Singh Night Market, it didn't feel real until I saw it. Evyn Fong did a phenomenal job capturing its spirit, because there's so much happening on that cover. But the entire book is brimming with colorful, vibrant art.”