Adventurers must travel to the Feywild and the Far Realm to prevent otherworldly forces from tearing a land apart.

“I'm a writer by trade, albeit it of a different flavor,” shares writer Terry H. Romero, who has written ten cookbooks over the past decade. The D&D adventure anthology Journeys through the Radiant Citadel features “Orchids of the Invisible Mountain,” her first officially published adventure, although Terry says the experience wasn’t dissimilar to her main job. “I like to think that writing a cookbook is not unlike writing for a tabletop role-playing game, in the sense that you're giving instructions but also encouraging creativity at the same time.”

Despite being new to TTRPG publishing, Terry’s been playing and running games since her ’80s childhood. She facilitated games at mini-conventions for almost ten years when she lived in New York City, and it was at a convention in New Jersey that she first met Journeys through the Radiant Citadel co-lead Ajit A. George.

“Ajit played in my game. I ran into him again afterwards at the bar, and he highlighted an event in the game that really terrified him. It was a very specific thing that I hadn't thought much about when I was writing it, outside of the fact that it was a little creepy, but it rattled him personally and was memorable because of that,” she remembers. “He told me about his experience and that started many years of working with him on other games. He sometimes asks me to play the more intense roles in live-action role-plays because I’m willing to go there.” 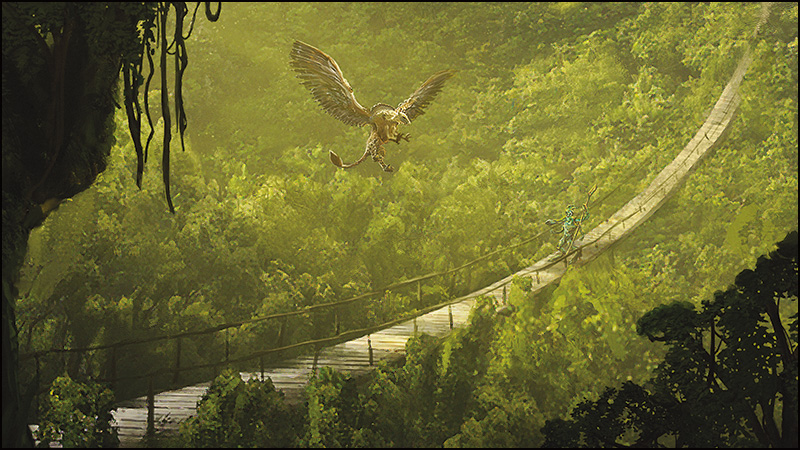 When it came to creatures in her adventure, Terry certainly went there. Borrowing loosely from Venezuelan folklore, she created a creature that’s attracted to conflict and the psychic rifts it creates in our society.

“I wanted a Lovecraftian aberration that’s attracted by war and discord. We don't know what it wants because it’s inscrutable and unknowable. Maybe we can defeat it, but maybe it never really goes away,” she says. “Whether they're short-lived humans or long-lived gnomes, it's still remembered in the collective consciousness of the Ataguan people. That was a way to make it suitable for a D&D audience but keep the folklore feel that it's still out there somewhere.”

Her choice of creature also led to some interesting map options. In an effort to provide players with a quick dungeon they can access, she looked to her Lovecraftian being once more.

“I wanted the characters to explore something that’s alien and creepy. And my brain went to these giant centipedes in the Amazon jungle that are terrifying. What if you had to crawl inside one, to help to save the world?” she asks. “Subconsciously, the original sketch of my map was reminiscent of the logo for Brazilian death metal band Sepultura. They have a lot of powerful lyrics about indigenous people and conservation and all the terrible things that are happening to the Amazon, so I must have had them on the brain.”

One of Terry’s key aims was to make the players understand that their characters are not wandering around a Northern Europe landscape. By experiencing its fauna and flora, she hopes they imagine this tropical region being situated on what could be the equator of this world.

“A big part of it was the terrain, the climate, the animals, and the plants. I wanted to assert very firmly that it's hot, it's sweaty, orchids are everywhere, and there are pools that might contain piranhas—or quippers, as they call them in D&D. I wanted the adventure to explore the llanos, which are vast, flat, tropical grassland planes containing animals such as capybaras, anacondas, and flamingos,” she explains.

“I also really wanted the adventure to visit a tepuis. My inspiration was the Auyán-tepui in Venezuela, where Angel Falls is located. A tepuis is a flat-top mountain found in the Amazon region of South America. These incredible mesas rise out of the jungle, with clouds on top.

“Science has discovered unique life forms that only exist in the high-altitude jungles on top of these tepuis, including plants, tiny frogs, insects, and birds. They don't even exist in other parts of the Amazon jungle! I wanted to tap into that otherworldliness.”

Terry says one of the most exciting moments will be when DMs run her adventure for 14th-level characters. She hopes they embrace a world where a common meal might be arepas and black beans, where characters stocking up for the road might purchase a bag of coffee, and where the drink of choice at the local rest spot is likely to be rum.

“To use a metaphor, my cookbooks are all vegan but I know that many of my readers and the people who make the recipes are not vegan. Similarly, there will many people who aren't familiar with Venezuelan culture who will run with this adventure. Again, it's like writing a recipe and they may not have the same exact ingredients available that I did when I worked on it,” she says.

“It's going to be fascinating to see how DMs present the adventure to their players. There are all these layers that could change based on the interpretation. But part of D&D is giving people permission to make those changes. I hope they follow it once the way it's written and then get creative from there, changing bits and pieces as they decide what their recipe will be.”