A quest for ancient lore reveals threats from the past and leads to a mysterious nation beneath the waves.

Journeys through the Radiant Citadel might be the first time D. Fox Harrell has worked with Wizards of the Coast, but his day job involves designing games and immersive experiences in digital media, using artificial intelligence and other techniques, and it has prepared him well.

“It means that I’m interested in blending imagination, metaphor, and fantasy, with culture, intrigue, social exploration, and uncanny settings. I also write fiction, so this was a natural place for it all to come together in a game that I’ve been engaged in since I was six years old. It’s a chance to reach so many different people at a broad scale and it felt like a splendid thing to do,” Professor Harrell, founding director of the MIT Center for Advanced Virtuality, says.

In building the modern coastal realm of Djaynai for his adventure and gazetteer, Fox took inspiration from its hallmark tradition of transmutation magic. He thought carefully about the people in this setting and looked for resonant elements that would transmute into their cultural touchstones. Blending Sudano-Sahelian palaces of mud brick and wood, West African storytelling, medieval Moorish streets adorned with lights, and the Gnawa people’s hypnotic bass musical instrument known as a guembri, his kingdom began to take shape.

“I explored the relationships between specific African locales and the African diaspora. I also thought about ideas of historical creativity and resistance,” he adds. “Author Amiri Baraka used the phrase ‘the blues people’ to describe elements of African American culture that transmute sorrow to beauty, which is what the blues does. I started with those sentiments, rather than a literal transposition of cultural traditions onto this world.”

Fox says one of the ways he thinks about game design and fiction is to look at what inspires him. That might be admiring the poetic play of cultures and class of Samuel R. Delany’s Nevèrÿon series or recalling the time he read the Elric saga as an eighth grader and pondering on specific moments amid its cruel Melnibonéan society.

“Elric’s culture is so cruel, especially ideas such as the orchestra of enslaved people who’ve each been altered to sing just one note,” he says. “While Samuel R. Delany raises a host of social issues through the swords and sorcery genre and manages to integrate them into his story, never with a heavy hand. That’s one of the things I wanted to achieve, writing an adventure that’s full of intrigue and mystery, with threads of cultural themes that I care about.” 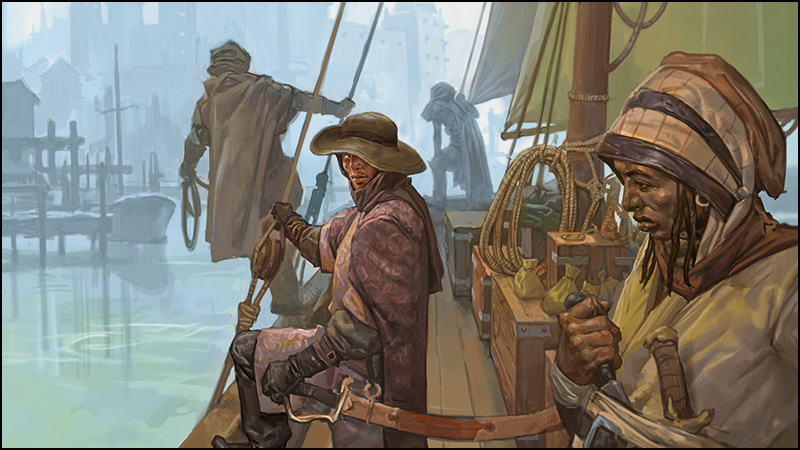 “The Nightsea’s Succor” also adds a new creature to the world of Dungeons & Dragons. Fox describes the ghost-like haint as one of the most direct cultural inspirations from our world, as it’s specifically connected to African-descended Gullah-Geechee people in the area of the United States where his great-grandmother lived. But it also has a personal connection for him, dating back to when he’d pour over the pages of the first edition D&D Monster Manual.

“The monster illustration I liked the best was the ghost and in some ways this is a ghost story. In the same way that a rakshasha is connected to Indian mythology, a haint is a kind of spirit that’s often connected to hoodoo traditions,” he explains, noting that this cultural tradition has had broad influence in parts of America.

“In folklore, haints are repelled by a particular kind of blue and in some southern areas it is common for aspects of porches to be painted ‘haint blue.’ I wanted something that was connected to this idea of ancestral legacy and was mysterious and ghost-like, but also that resonates with this specific cultural history.”

Illustrator Claudio Pozas brought the haint to life, including an evocative mask that’s connected to the cultural origins of the location. Fox looked at a number of versions of masks, created using different crafting traditions, until he found one that fit the creature.

“One of the things I liked about the illustration of that ghost in the Monster Manual was the cowl, which only showed the eyes,” he explains. “I think you get a similar effect with a mask. Even if the DM takes some creative license with this creature, I’d like it if haints always have some way in which they’re obscured to maintain their mystery.”