A local champion goes missing following a deadly flood, leading to a search for her along the rivers of a vast swamp.

Hugo- and Nebula Award-nominated short story writer Mimi Mondal is more accustomed to writing fiction than tabletop role-playing adventures. Brought onboard to share her knowledge of South Asian cultures in the adventure anthology Journeys through the Radiant Citadel, her scenario needed to challenge 9th-level characters. It was no small order given that “In the Mists of Manivarsha” was her debut adventure.

“I’ve played Dungeons & Dragons but this was the first time I’d ever written for D&D. I had to adapt my way of thinking and learn to include playable actions alongside my descriptions. Especially as this would be embarked upon by 9th-level adventurers,” she recalls.

“It’s one of the reasons there’s an athletic competition going on in the background. When you're creating non-player characters for a second-tier adventure, very few of them can be commoners who are everyday people. The finalists taking part in that competition have already been tested and shown a certain amount of skill. They’re probably the most capable people currently in Shankhabhumi.” 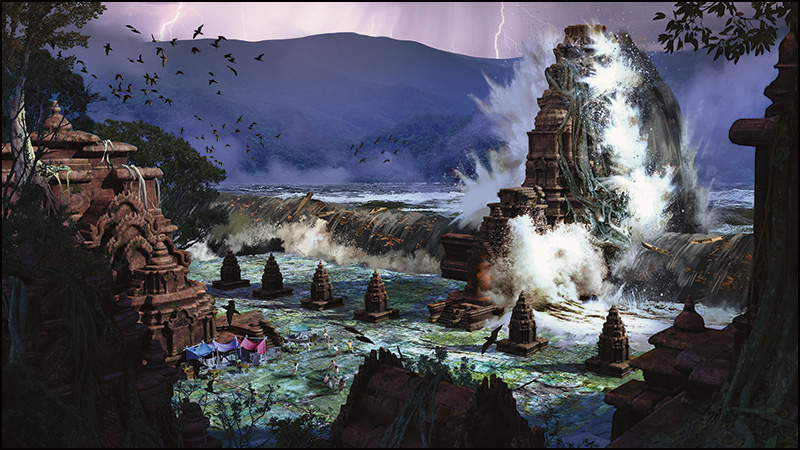 A River Runs Through It

Mimi was able to fall back on her fiction writing when it came to fleshing out her world. She had previously done some research on historical ecology for a science fiction story she started writing in 2019 and never finished. But that information didn’t go to waste, as she knew the landscape of Shankhabhumi needed to be riverine (defined as either relating to, formed by, or resembling a river; or living or being situated on the banks of a river).

“I based my region on Bengal and the way it’s geographically set up. It’s a very riverine land. The Himalayas are shaped like an arc that runs through the north of Bengal, with very high mountains and large rivers that carry silt down to the Bay of Bengal in the south. So rivers are an authentic part of that world,” Mimi notes, adding that melting snow from the mountains and cyclones (commonly known as hurricanes in North America) coming in from the sea cause the rivers to flood every year.

“Because of that, the rivers are often a little different from year to year. My historical research showed a discrepancy in older maps, with 14th-Century and 15th-Century maps showing the same river in a completely different course. The smaller streams, creeks and inlets move with every big flood, but even a big river can alter its course a significant distance over a century or more. And as that happens, all the cities, settlements, agriculture and commerce that are dependent on the river also shift with it. A city that's important at one point of time may have withered away two centuries later, because the river moved away from it. That complete dependence of the land on its rivers was something I wanted to capture.”

Tasked with creating a nature spirit that embodies a river, Mimi decided that the word “riverine” would also make an excellent name these creatures.

“I was conscious not to make the riverine too similar to other river or water creatures, because there are plenty of those to choose from already in fifth edition. I researched all of them and looked for a gap,” she says. “I knew I was adding something to D&D canon, so I tried to make it mainstream. My idea was that any river in the D&D multiverse could be awakened into becoming a riverine. That way a DM could lift the creature out of this adventure and use it in any campaign.”

Riverine isn’t the only name that carries significance in Mimi’s text. When she was building the city of Shankhabhumi in her adventure and gazetteer, she took inspiration from the Bengal region in the eastern part of South Asia, which now occupies Bangladesh and the West Bengal state of India, the latter being where she grew up.

“Bangladeshis and people from West Bengal speak the same language, which is Bengali or Bangla. Most of the names I’ve used are in Bengali pronunciation, which is slightly different from the Hindi pronunciation. It's similar to the difference between the various Western European languages, where you can tell that it's a certain word, but it maybe takes a different vowel,” she explains.

“I really enjoyed coming up with the names, each having a certain meaning. For example, the word ‘sagorpur’ means city by the sea, and Sagorpur in my world is the city at the mouth of a river by the sea. And angul means finger in Bengali, so the creepy angul trees are trees with hands. You'll find the character names also describe their characters.”

Bengali literature also put its stamp on Mimi’s work. The novel was first imported as a form there centuries ago, during Britain’s late Romantic period, when the region was a British colony. Since she didn’t read English as a child, she read a lot of Bengali literature that had an unexpected seam of horror running through it.

“Bengali as a language has a large canon of literature. Right from the mid-19th Century when you find Western literary forms like novels, plays and short stories being written in Bengali, most of our big fiction writers have written realism and horror in the same flourish,” she says.

“In certain cultures, a belief in something is so strong that it's part of how people understand reality. That’s what we now call magical realism: a mode of perceiving reality where the supernatural is part of it, not idle imagination. Centuries back, these Bengali authors would weave in and out of horror and realism, and you’d never know which work of fiction that started with a fairly mundane, day-to-day setting would suddenly head into horror. It's a realism story, until it suddenly gets very scary.

“I don't know why no-one’s ever coined the term Bengali Gothic, but to me that’s what it feels like. We all believe in ghosts and other supernatural things, that's just life. I am massively influenced by that tradition and it’s something I wanted to pay tribute to.”