Mysterious creatures cause a gold mine to collapse, precipitating a race between rival princes to save those who are trapped.

Dominique Dickey wrote the 7th-level adventure in the Journeys through the Radiant Citadel adventure anthology, “Gold for Fools and Princes”. This adventure takes place in the Sensa Empire, which is made up of the three city-states of Anisa, Niba, and Tarikh. They wanted its story to reference a certain era of North and West Africa that wasn't rooted in colonialism or in pain, taking inspiration from wealthy empires in Black history. Certain historical figures had stood out in their education about that period, and they were eager to know more about them.

“A lot of pre-colonial African history is glossed over depending on who's teaching it. I had starting points where I knew I wanted to learn more about Mansa Musa and the Mali Empire, and from there I did a lot of independent research,” they say.

“I wanted Sensa to be a prosperous society with internal intrigue and drama, but not because of a massive external threat. I wanted to keep colonialism or anything that looks like colonialism out of the story, to the point where there are very few references to how the Sensa Empire interacts with outside locales in negative or martial ways, aside from a mention of bandits.”

Part of Dominique’s creative process was about letting go. They knew there were modifications they’d have to make to fit the historical touchpoints into a game setting. They say understanding what needed to stay the same from table to table was the most difficult part.

“It's not just telling a story. It's giving room for the players and the DM to change and interact with the story. I had to figure out, if I were to translate this to a fantasy setting, what license could I reasonably take? What would need to change? What should I try, by all means, to keep the same?” Dominique says.

“I had to be very clear about what aspects of this culture are priorities for me and are static, versus what aspects the players and the DM can bend to the different stories they're already telling.” 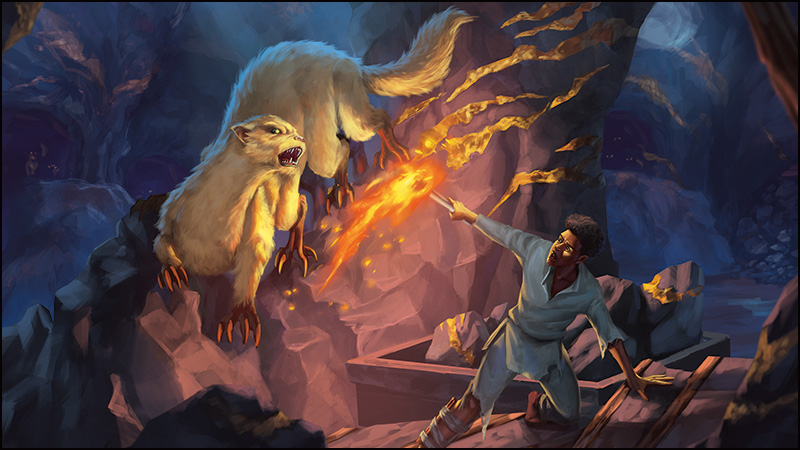 Dominique also dipped into D&D history without initially realizing it. The monster they wanted to include had one defining feature that was relevant to the setting: it eats gold. The book’s co-lead, Wesley Schneider, pointed out that a monster which appeared in earlier editions of Dungeons & Dragons already had this ability, and said he’d check if the aurumvorax could be updated to fifth edition.

“I pitched a burrowing creature that was rodent-like and ate metal, because that seemed to be a natural fit. While the concept had been done before and I didn't design the monster from whole cloth, what I did decide was to try and make it friend-shaped,” Dominique shares.

“In creating the art order, I asked that this monster be playful, capricious and visually similar to a ferret. I imagined it as a long noodle that just happens to have a lot of legs. Those legs probably being very good for snuggles, if the aurumvorax is not trying to kill you.

“I can’t wait to see what different tables do with this creature. Knowing my home group of players, there'll be some kind of elaborate trap or cage system to capture them and get them safely out of the mines. And if there's a way to tame them, perhaps by feeding them enough gold that they won't go feral, that’s another reason to adventure.”

Every adventure in the Journeys through the Radiant Citadel anthology contains a gazetteer outlining its setting and lore in much greater detail. This background information was crucial to the project and was the first piece each writer finished before continuing to work on their adventures. In Dominique’s case, they used the Sensa Empire gazetteer in exactly the same way DMs all over the world will now have the chance to use it.

“Most of my early research went into figuring out how to build the strongest setting possible. I considered the world building to be primary, and I built the setting as a sandbox with no agenda. I knew DMs and players would take this and use it as they like. And out of that, I thought, ‘If I had this setting, and I could do whatever I want, what would I do with it?’ And that's where the adventure came from.”

Dominique admits they’re curious to see what happens when DMs take the location details and build their own campaigns out of it, whether they start with the “Gold for Fools and Princes” adventure or not.

“I wanted to give DMs and players the tools that they'd need to approach it that way. For me, what differentiates writing for games from writing fiction is that you put it in someone else's hands, and they take it and run with it. I'm aching to see how people use it. I hope people tag me or let me know when they see streams or home games using this adventure and its setting out in the world.”