The cure for a spreading curse leads from an abandoned mine to a city celebrating the departed.

There are many entry points to your first game of Dungeons & Dragons. But Mario Ortegón, writer of “The Fiend of Hollow Mine” in the D&D adventure anthology Journeys through the Radiant Citadel, took the long way around. Having already ventured into this enchanting fantasy world through books, television, and video games, it was an onscreen performance by Jeremy Irons that finally got him sitting down at a table and playing.

“People are often surprised when I tell them that I started playing Dungeons & Dragons because of the 2000 movie starring Jeremy Irons,” he admits. “I was aware of D&D in general before then. I’d read the Dragonlance trilogy when I was very young, but only viewed them as fantasy books that featured wizards and dragons. And then there was the Dungeons & Dragons animated TV series. I’d even played the Icewind Dale and Baldur's Gate computer games, so I’d been consuming D&D for a long time. But I didn't start playing until I saw that movie. I guess it increased the visibility of the core game and finally made me realize it was something that could be played.” 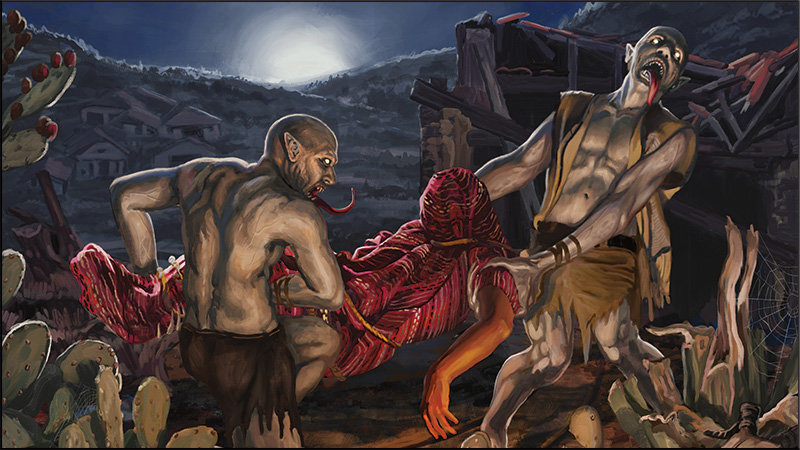 It was a personal project of Mario’s that brought him to the attention of Journeys through the Radiant Citadel co-leads Ajit A. George and F. Wesley Schneider. He was working on a campaign setting based on Mexican myths and legends when Ajit reached out to him.

“I recognize that it’s not common to go from publishing to a private audience that’s supporting you online to working for Wizards, so I feel super lucky that this was my first high-profile freelance job,” he says, noting that he wanted this project to be different from his previous Mexican-flavored TTRPG work. “The setting I’d been working on was heavily based on pre-Hispanic fables and lore, so I wanted to make something that felt true to a contemporary Mexican experience, while also being D&D.”

Mario soon settled on the Mexican festival of Dia de los Muertos, which translates as Day of the Dead. This multi-day celebration of departed loved ones is seen as a joyful event rather than a time of mourning.

“The world knows Mexico for Dia de los Muertos and it’s such an iconic festivity. If you visit different parts of Mexico, it’s celebrated in different ways. I started focusing everything through that lens as I sketched out the adventure and the Night of the Remembered was born,” he remembers.

“This fantasy version of Dia de los Muertos sees relatives calling their loved ones back by remembering them. They have to build an ofrenda, which is an altar where they place food and other items to remember them, as that’s how they’re called back. One of the initial hooks for this adventure is that the characters know about the Night of the Remembered and may travel to the city to commune with someone that they lost in the past.”

On the Same Page

Mario received his own visitation from a relative when he saw the art that had been created for “The Fiend of Hollow Mine.” When he originally wrote the character of Paloma, who is a folk hero fighting for the rights of the poor, he had an image of his own grandma in mind. But that wasn’t something he could easily explain in his instructions to artist Adrian Ibarra Lugo.

“Obviously, I couldn't add a picture of my grandma into my description for the art I was requesting. But when I spoke with Adrian, he mentioned that he’d used photos from his own family history to help him draw the characters,” Mario reveals. “When the art came back, it almost made me cry because Paloma looked so much like my grandma and was so close to what I had in mind. I couldn't have asked for anything more.”