Agents of a long-lived emperor seek a timeless secret to keep their ruler in power at any cost.

If you’ve played the episodic video game Life is Strange: Before the Storm and were thrilled to experience a Dungeons & Dragons session with two of its NPCs, then you have writer Felice Tzehuei Kuan to thank.

“My biggest D&D claim to fame is that fan-favorite sequence in the game,” says Colorado-based Felice, who works as a narrative director at the video game company Deck Nine. “I was one of the writers on that optional story segment, where you get to sit down with the characters Steph and Mikey to play D&D with them for about 20 minutes. Before we wrote that, we played D&D as research. That’s what got me into playing.”

Felice first met Ajit A. George, one of the project leads on the D&D adventure anthology Journeys through the Radiant Citadel, at a live-action roleplaying convention. Their game careers have developed in parallel, and the call from Ajit to add her voice to the book was the first chance they’ve had to collaborate on a project.

“He reached out to me. In my day job I lead a team of writers and narrative designers and we write cinematic narrative adventure games, but this is my first tabletop publication. It’s been an awesome first project,” she reveals, adding that creating her adventure, "Buried Dynasty," for 13th-level D&D characters didn’t faze her.

“My adventure deals with high levels of government, so Ajit and Wes [co-lead F. Wesley Schneider] suggested that it should be high level as well. Throughout, I tried to keep in mind that the adventurers should feel like their actions are making a large difference.” 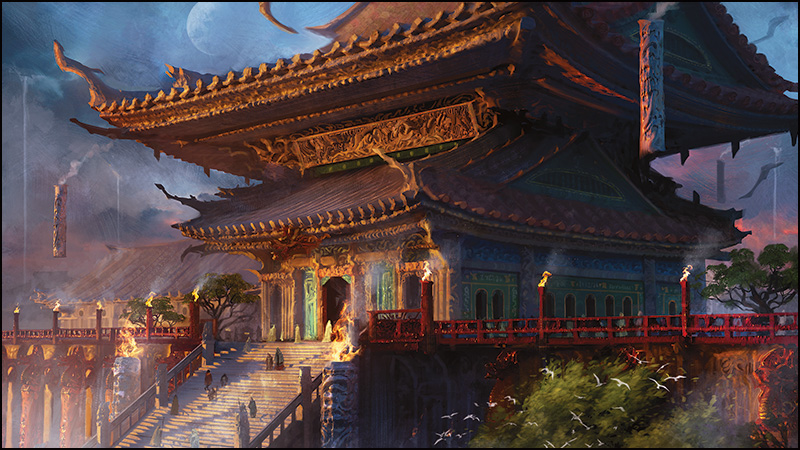 One of the highlights of Journeys through the Radiant Citadel has been the ability of the writers to draw from their own cultural backgrounds to flavor their adventure and gazetteer text. Felice, who was born in the States and is Taiwanese American, says one of the most rewarding parts of the project was being able to look at a period of history and have that research inspire a fantastical world.

“I feel that so many of the writers on this project have been waiting their entire careers to be handed this chance to put everything that they want to write about their culture into an adventure. And their commitment and energy was understandably off the charts,” she reveals.

“One of the coolest aspects was looking at somewhere with a historical eye and figuring out the places I would want to intersect with if I were going back in time. What’s the everyday life of that place? How do people make a living? What do they manufacture? What do they eat? And how can that be part of an adventure.”

The research that went into Felice's fantasy location, which is based upon the Forbidden City in China’s Dongcheng District in Beijing, also extended to the art that was commissioned alongside the text.

“This felt especially meaningful when it came to the characters. When I look through the folder of art that I sent over, it's very emotional to see the twenty middle-aged Asian faces that were included,” Felice says, acknowledging a need to do right by the cultures in every way. “And while no one else may notice, we changed the number of columns on the art for the main palace so that it doesn't have an unlucky number of columns.”

All in Good Time

One of the most impressive feats in "Buried Dynasty" is how time itself feels like a character. The weight of history is ever present in the background and that sense of heritage is something she inherited from her parents.

“My parents both emigrated to the United States from Taiwan, and my main connection to my culture is through the family stories they and my grandparents have told me. And one of the biggest impressions I got from interacting with them is the sheer age of the Chinese culture and the weight that carries. I wanted to channel that element,” Felice explains.

“The city in my adventure is the capital city of the current dynasty, but that current dynasty is part of a civilization that’s thousands and thousands of years old. And there's a lot of pride in that age. They herald their wonderful traditions and their stability, but anything that old is going to have a ton of skeletons in the closet. And that was very interesting to me.

“I imagined how much sniping there might be and obsession with ranks and who's in charge and who's on top. If you have stability for such an extended period, what are you going to do with yourself except squabble? I think there's a lot of adventure potential in a city that is constantly at its own throat.”