Rageful spirits provoke a dragon to go on a deadly rampage.

“Most people know us as a cute country with great beaches in Southeast Asia. But nobody talks about the fact that our history is as intricate as the weavings that our indigenous tribes create. We can't even begin to see the traces of the different cultures that have left their imprint on us, and how we've imprinted on them in turn throughout Southeast Asia.”

Pam drew aesthetic notes from her own childhood, based on daily life in the capital Manila, as well as trips to her father's family province of Taal in Batangas. But she didn’t want her 10th-level adventure “Between Tangled Roots” to focus on a people living under colonization, instead portraying a country striving to move past those conflicts.

“I wanted a fantasy setting that's inspired by what I know, but one that’s living in the shadows of being free. It’s a nation that has shucked off the effects of several wars and is making something out of itself. Although you can still see the many scars of its previous life,” she says.

“I grew up going back and forth from Manila to that province down south, seeing all of these nice big houses, some of them already in ruins, but others wonderfully maintained. It really leaves a mark on you. The furniture, the clothes, the big churches—even if I didn't have the words at the time, it helped me feel a connection to my roots. You see how hard people are fighting to keep what they are intact. It's a strange dissonance that reminds you that your country's been through some harrowing stuff.” 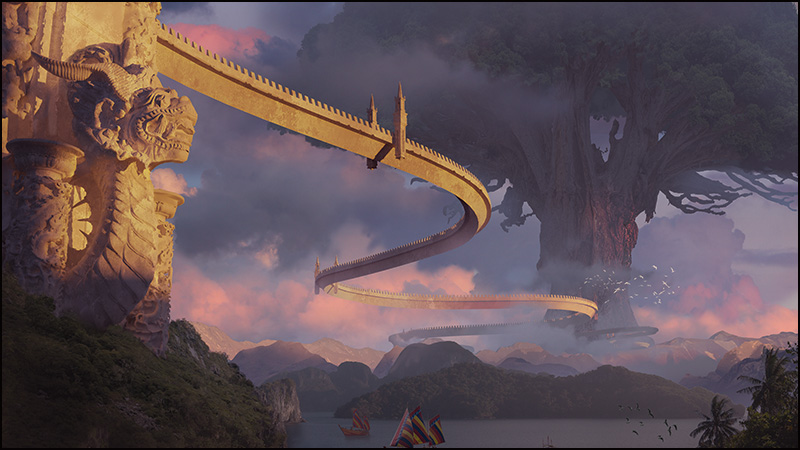 If the setting of Dayawlongon excites tabletop role-players, then the sight of a legendary creature from the folklore of the Philippines should turn that excitement up to eleven. The bakunawa is a dragon that's specific to the country’s literature and Pam was keen to place it at the heart of the story.

“This folkloric dragon is a symbol that most Filipinos will recognize when they see it in the book. I'm particularly proud of its design. When the art team asked what it looks like, I said it has to be serpentine. We don't conceptualize dragons as being dinosaur-like in the way that the West does. They're more sinuous with fins,” she describes.

“I remembered that multi-colored scales don't necessarily have to come from lizards, they can also come from fish. I took pictures of betta fish and knew that those were the scales I wanted. When I saw Brynn Methane’s final art, I was amazed that what was in my head had been translated onto paper.”

With its form locked in, Pam also had to decide what this unusual dragon could do. That wasn’t as straightforward as it might seem, as the legend of the bakunawa tells of a dragon that ate seven moons before being killed by a god.

“Even specialists in Philippine folklore and mythology don’t know what a bakunawa actually does,” she admits. “The only thing that we have in terms of magnitude is the legend about it being large enough to eat seven celestial bodies. The question became, how do I scale down a moon-eating creature for a second-tier adventure? That’s the reason we’ve focused on its ability to fight and swallow.”

The resulting stat block creates a new species of dragon with a fascinating legacy behind it. And it was important to Pam that the bakunawa was a sentient being with its own history.

“I wanted to create a creature that wasn't a monster per se. Partly because I wanted to complicate the lives of an adventuring party that might believe such things are simple,” she says. “A DM might ask the players how they’re going to deal with this creature and that could lead to a lot of interesting discussions. As a former teacher, it's important to me to create something that people might ponder on and carry into their next adventure.”