D&D for Beginners Learn About the Game

New to Dungeons & Dragons? We'll walk you through options that introduce and teach the game, and help get you started!

If you (or someone you know) is interested to find out more about Dungeons & Dragons, the Young Adventurers Guide series provides illustrated primers to the types of characters, creatures, and adventures that help make up the game of D&D.

The perfect jumping-on point for young fans of fantasy looking to give D&D a try. In these illustrated guides, you're transported to the legendary and magical worlds of Dungeons & Dragons, where you are presented with one-of-a-kind entries for different elements of the game—including detailed illustrations, maps, cutaway illustrations, and fun insights.

If you're looking to start playing Dungeons & Dragons, consider any of the following boxed sets. Whether it's the classic D&D Starter Set, the newer D&D Essentials Kit, or even one of our themed sets such as Rick and Morty or Stranger Things, each set contains everything you need to learn the basics of D&D and get started playing! 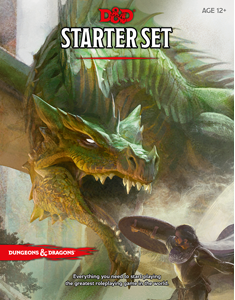 The D&D Starter Set is your gateway to action-packed stories of the imagination. This boxed set contains the essential rules of the game plus everything you need to play heroic characters on perilous adventures in worlds of fantasy. Explore subterranean labyrinths! Plunder hoards of treasure! Battle legendary monsters!

Ideal for a group of 4-6, the D&D Starter Set includes: 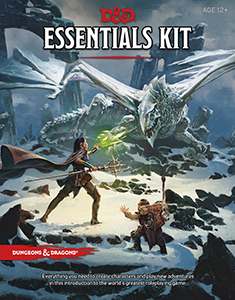 The D&D Essentials Kit is a new introductory product meant to bring D&D to audiences interested in jumping into a fantasy story. This boxed set contains the essentials you need to run a D&D game with one Dungeon Master and one to five adventurers. A newly designed rulebook on-boards players by teaching them how to make characters, and the included adventure, Dragon of Icespire Peak, introduces a new 1-on-1 rules variant.

Ideal for a DM and 1-5 players, the D&D Essentials Kit includes:

The Stranger Things Dungeons & Dragons Starter Set contains everything players need to embark on a Stranger Things adventure including the essential rules of the roleplaying game. It's a great way for new as well as seasoned Dungeon & Dragons players to experience the D&D adventure Stranger Things character Mike Wheeler has created for his friends. Pick your character—will you be Will the Wise or Dustin the Dwarf? Get your fireballs ready as you investigate the mysterious castle and battle the ferocious Demogorgon. Prepare for just about anything, because the game just got stranger. 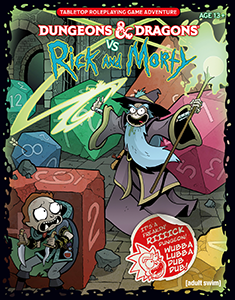 The world's greatest roleplaying game meets television's most dysfunctional family! What could possibly go wrong? D&D partnered with Adult Swim to bring this boxed set, blending the world of Dungeons & Dragons with the mad narcissistic genius of Rick Sanchez’s power-gaming sensibilities, and includes everything a Dungeon Master needs to channel their inner mad scientist and run a rickrolling adventure for up to 5 players.

The above boxed sets provide a complete Dungeons & Dragons experience, enough to provide hours of play. You can even play through their adventures multiple times. You might be surprised at how differently things can turn out! But one of the most rewarding things about D&D is that it provides the opportunity to create characters, and even worlds, of your own—and that's where the core rulebooks come into play! 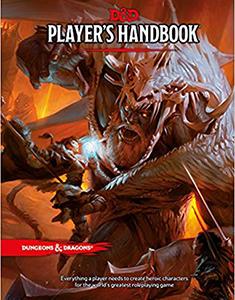 If you want to create a greater variety of characters or populate your adventures with other monsters, check out the fifth edition Player’s Handbook, Dungeon Master’s Guide, and Monster Manual. These rulebooks introduce you to the vast multiverse of D&D and invite you to create unique characters and worlds within it.

Providing the inspiration and guidance to spark your imagination and create worlds of adventure for your players to explore and enjoy!