To our D&D Community:

When playing Dungeons & Dragons, it’s not uncommon to finish up a campaign with your characters saving the world or rescuing innocents. It seems many adventures you watch on twitch.tv/dnd have some variation of that theme set in a fantasy world… but fans can have a strong, positive impact in this world, too.

Extra Life is a charity organization D&D has been happy to be involved with since 2013, with the express purpose of driving donations to the Children's Hospitals Network. And for 2021, we’re continuing our livestreaming and other efforts to help drive even more donations!

How to Take Part If you want to raise money for kids this year by creating your own individual or sub team page, it's easy! The Extra Life site will guide you through the steps of registering, and you’ll be automatically added to the Dungeons & Dragons Extra Life Team. All donations that you and your sub team raises will help us reach our goal!

Donate Directly:
You can also contribute at any time toward the effort. To help out, please consider donating directly to the D&D Team. You can also donate to any of the DMs and groups within the D&D Team.

Other Ways to Support 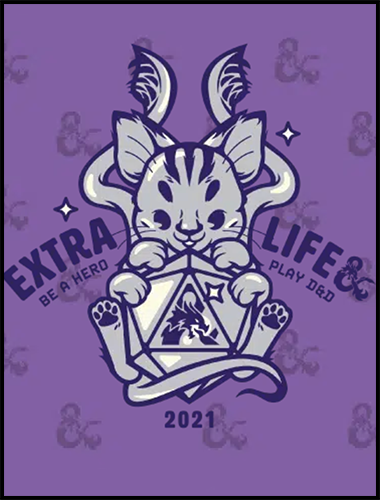 Dirlagraun, the Witchlight Carnival’s, gray-whiskered displacer beast looks after lost children much like the D&D community bands together to help sick and injured children. Once again, we are pleased to announce that Dungeons & Dragons has partnered with Extra Life to create special event apparel! 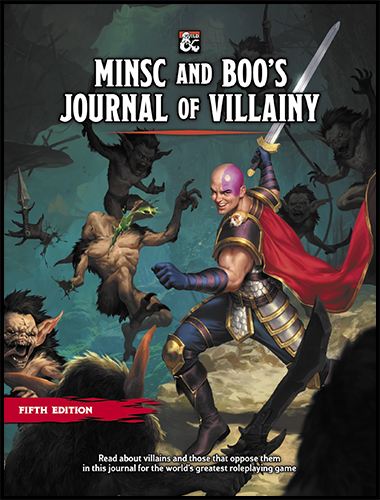 Minsc and Boo's Journal of Villainy

Minsc and Boo were able to track down old friends and hated enemies and find out what they’ve been up to over the past century. They’ve compiled everything into this journal, edited by the traveler extraordinaire, Volo Geddarm.

Included in this journal are four cities, including Athkatla and Baldur’s Gate; ten group patrons led by some of Minsc and Boo’s old friends; a dozen new monsters; six arch villains and eleven dastardly henchmen. Available now on the DMs Guild, with all Wizards of the Coast proceeds donated to Extra Life:

To help out, please consider joining or donating directly to the D&D Team.

Adventure material is available now on the DMs Guild, with all Wizards of the Coast proceeds donated to Extra Life!

Shop on the DMs Guild