Greg & Shelly are back at you with the very first show of 2020! The two discuss the recently announced Forgotten Realms Laeral Silverhand's Explorer's Kit as well as Monster Madness, the brand new Dungeon Mayhem expansion pack coming your way this Valentine's Day! In Lore You Should Know, our pal Adam Lee stops in to drop some knowledge on Laeral Silverhand. Our special interview guest this week is a dear friend of the show and Kobold Press mastermind: Wolfgang Baur! 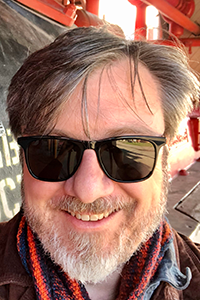 Wolfgang Baur is the publisher at Kobold Press responsible for the Tome of Beasts and Heroes Handbook, and an award-winning game designer, editor, and roustabout of long standing, from TSR to Wizards of the Coast to Kobold Press. He is a contributor to the Kobold Guide series on game design, and a fan of black coffee, dark fantasy, and shadow magic. He was a designer on both Tyranny of Dragons and Ghosts of Saltmarsh.

You can find Wolfgang on: