Greg & Shelly break down the brand new book, Explorer's Guide To Wildemount written by Critical Roll's Matthew Mercer and the D&D Team! Make sure you get your copy when it releases March 17th. Afterwards, the pair discuss the wonderful write up on D&D by USA Today. In How To DM, Shelly welcomes Adam Lee to break down managing your party. Our special interview guest this week is Brennan Lee Mulligan of Dimension 20 and College Humor!

Dragon Talk: Brennan Lee Mulligan & How To DM on Managing Your Party 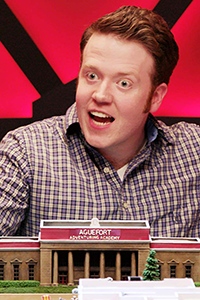 Brennan Lee Mulligan is the Creator and Dungeon Master of Dimension 20, CollegeHumor's D&D Actual Play series on Dropout. He's been running games of D&D since 2nd Edition was in print, and has worked as a LARP Writer for the Wayfinder Experience, an Improviser at the Upright Citizens Brigade Theatre, and a Cast Member at CollegeHumor. He is also the writer of the webcomic Strong Female Protagonist.

You can find him at: