Greg & Shelly are starting to get the hang of podcasting remotely and are here to get you up to speed with all the new D&D stuff heading your way! In our opening news and introductions, we talk about the new Figurines Of Adorable Power, Monster Madness, Explorer's Guide To Wildemount and Mythic Odysseys Of Theros.

Afterwards our own Kate Welch calls in to tackle another edition of Random Character Generator! This time our character randomly created by D&D Beyond is Kotimur, a Grung Ranger. We are thrilled to welcome our special guest this week, actress Tiffany Smith! 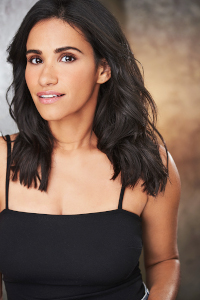 Tiffany Smith is the definition of a modern day Hollywood multi-hyphenate as an actress, host and web personality. In her latest role, Tiffany portrayed 'Meghan Markle' in Lifetime's movie "Harry & Meghan: Becoming Royal," which debuted on May 27th, 2019. As an actress, she has also been featured on hit TV shows such as The CW's Supernatural, The CW's Jane The Virgin, FOX's Behind Enemy Lines (directed by McG), and films such as Annapurna Pictures' Vice. Tiffany has additionally lent her vocal chops as the voice of 'Hawkgirl' in Lego DC Super-Villains video game.

Tiffany has worked as an on-air presenter on a number of projects, such as hosting DC Universe's "DC Daily," The CW's Fan Talk: The Flash and Fan Feast, AMC's Geeking Out (alongside Kevin Smith and Greg Grunberg), Fandango's Movie 3-Some, and IGN's Live at San Diego Comic Con coverage for Disney XD. Within the digital realm, she has hosted YouTube series such as Collider's Jedi Council, Schmoes Know and G4 Network's Attack of the Show. She has also covered the general entertainment landscape, appearing as an expert, contributor and guest host on many networks.

Tiffany's career initially took off in New York. While there, she began hosting shows and red carpets for iVillage, Sony, AT&T's Tech Channel, Spike TV and Activision. After spending time in NYC and traveling around the globe, she decided to move to Los Angeles where she made a name for herself within the geek genre.