Greg & Shelly reflect on a fantastic 2019 and look forward to 2020! A huge thanks to all of our fantastic listeners for making this show so much fun! In Lore You Should Know, Ari Levitch returns for conversation on the buttless in Dungeons & Dragons vs Rick and Morty. Our special interview guest this week is actor, singer and professional role player Xander Jeanneret!

12:26: Lore you Should Know with Ari Levitch 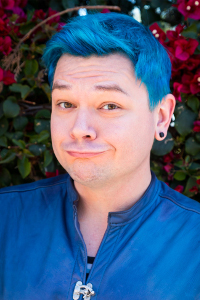 Xander Jeanneret is an actor and professional roleplayer. He has been featured in many live-play streams of different games, but most notably as:

Xander also produced a video with Dungeons & Dragons, entitled "Midwest Moms Play D&D", in which he taught his mother and her friends from the bar in Wisconsin to play D&D. He played his character Rikki at this year's "D&D Live" event, as well as at the "Lost Odyssey" charity event. In 2019, Xander ran a four-day session of D&D at the event "D&D in a Castle" in Newcastle, England. He is scheduled to return for two sessions in the summer of 2020.

Xander is also a part of the nerd parody band "The Library Bards". The single off of their newest album (bomBARDed) is the Library Bards' parody of AC/DC's "TNT", called "DND". The song is filled to the brim with references that will delight both old and new players.