Article Dragon Talk: Greg Titian of How To Drink & Sage Advice on Weapons

Jim Zub sits in with Greg & Shelly to discuss Rick and Morty vs D&D (out now!!), Extra Life, Ethan Gilsdorf's New York Times article on D&D and much more!  Later, Jeremy Crawford stops in for an edition of Sage Advice on Weapons. Our special guest this week is How To Drink Youtuber Greg Titian, who concocted two very special D&D cocktails for your table to imbibe (responsibly) during your own games! Be sure to check his Youtube page for the recipes and step by step instructions.

Dragon Talk: Greg Titian of How To Drink & Sage Advice on Weapons 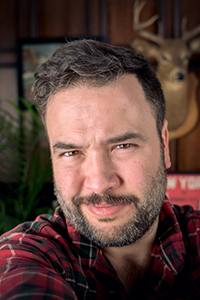 Greg Titian is the host of the Youtube show called “How to Drink”. How to Drink is a show about making drinks and how to drink them! He lives in NYC, one of the centers of the cocktail universe, and even though he’s never worked in a bar he sure enjoys making and drinking cocktails. In addition to making drinks on his show, Greg also loves to talk about movies, video games, TV, books, whatever really. He makes classic cocktails, Tiki cocktails, new original cocktails, and pulls inspiration from wherever his mind wanders.

Although Greg keeps things pretty fast and loose and is prone to stream-of-consciousness tangents, he takes the production side of things very seriously. He has enjoyed playing D&D since its 2nd edition and will soon be starting and DMing his own livestreamed D&D campaign!