Greg & Shelly talk about the D&D Sapphire Anniversary Dice Set, Dark Alliance & Monster Madness! In Lore You Should Know, we welcome back Ari Levitch who delves into the denizens of the Dungeons & Dragons vs Rick and Morty campaign. Our special interview guests this week are David and Hope Spears.

12:53: Lore you Should Know with Ari Levitch

41:05: Interview with David and Hope Spears 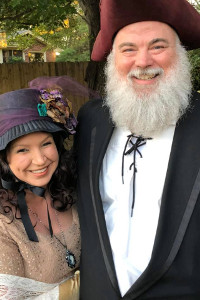 Hope and David Spears do an amazing job of bringing people together and helping them find enjoyment in their free time. Hope and David are huge gamers (mostly board games) and David is a huge RPGer. They have had three successful game stores over the past 17 years. David sold the first two (the second one is the largest WOTC event focused store in Nashville). He recently closed the 3rd location because of a promotion he got at his day job at Vanderbilt. He just could not focus on both.

Hope and David open their home to people every week to game and enjoy each other's company. They started a meet-up group at a brewery/pub for weekly D&D that actively has between 15-30 people playing each week. They host booze and board games every six weeks where friends and their friends come over for gaming. They play in a weekly group and have toyed with the idea of streaming it. They own a small company that they are developing called MarriedWithMeeples. And David has a D&D focused website called TheDiceTellTheStory that he is working on in his spare time. Neither of these two are ready to go yet but they hope to have them up and running in 2020.