Dungeons & Dragons and G4 have assembled a studious and accomplished crew of adventurers to bring D&D Live 2021 to life on July 16 & 17. The two-day event will feature continuous entertainment designed for fans’ enjoyment including essential information on upcoming D&D storylines, Magic: The Gathering sets, and secret projects.

The character sheets are filled, the campaigns exhaustively researched—and it’s finally time for the annual star-studded adventure, D&D Live!  Streaming on Peacock as well as all Dungeons & Dragons and G4 digital platforms, D&D Live is rolling with full initiative to deliver laughs, escapades, and exclusive reveals.

Go to G4TV.com/dndlive for more information on all of the programming coming during D&D Live 2021!

G4 and D&D are partnering to deliver this programming in a myriad of ways for fan’s convenience: 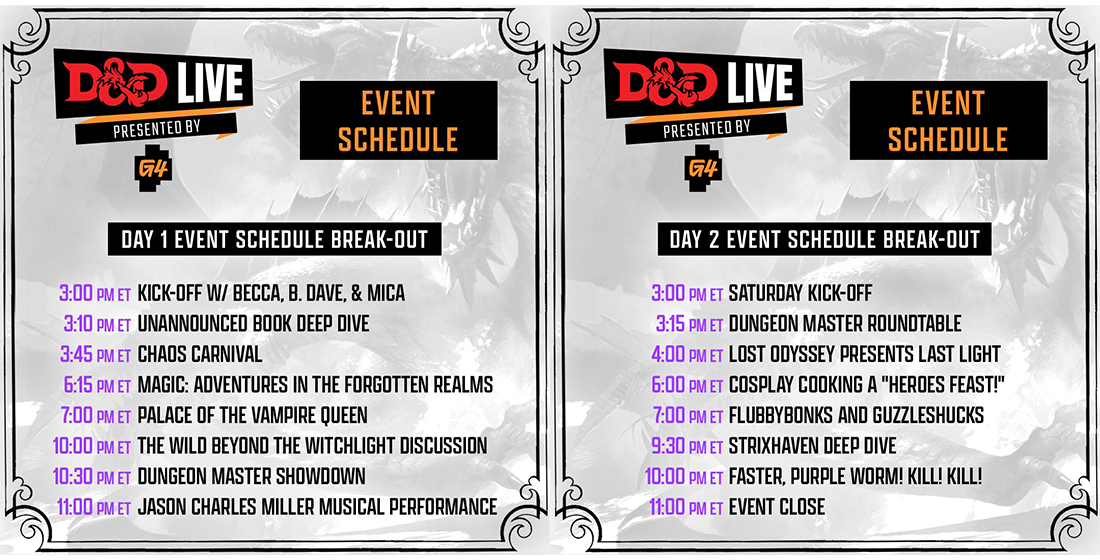 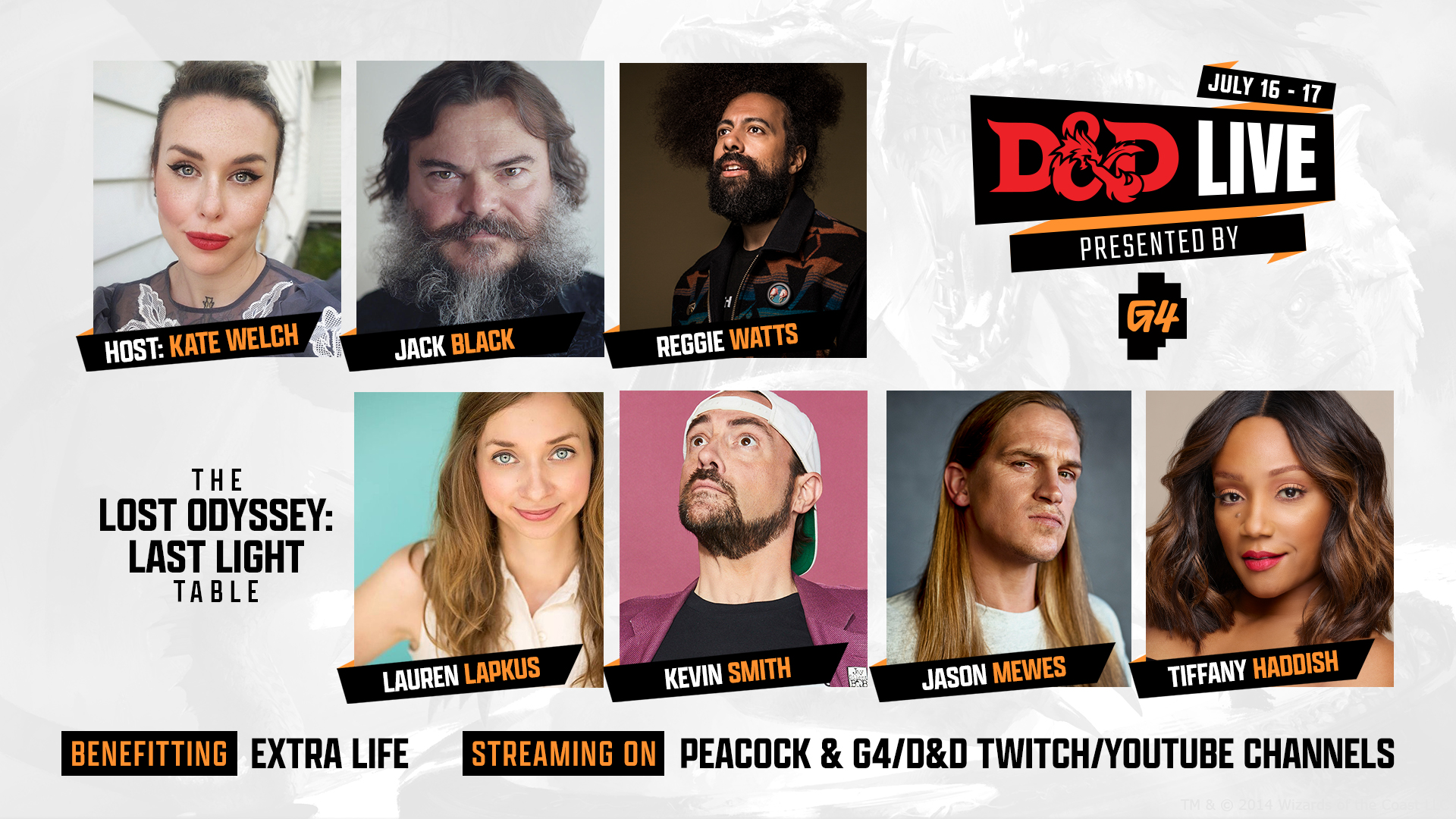 The Chaos Carnival Table featuring some of the WWE’s most adventurous superstars! Leading the table on its quest for completion is Dungeon Master Aabria Iyengar, who will help the WWE Superstars navigate the Chaos Carnival.

Popular streamers DrLupo and Negaoryx will join comedian Ify Nwadiwe and G4 cast members Kevin Pereira, Adam Sessler, and Fiona Nova for The Flubbybonks and Guzzleshucks Table, a title we landed on after running “Pereira and Sessler” through a gnomish wizard name generator. Leading the table on its adventure is Dungeon Master Amy Vorpahl, a tabletop pro and real-life bard in the key of D&D. Amy also serves as the head writer for D&D Live 2021.

The Palace of the Vampire Queen Table

The cast from Peacock’s hit comedy A.P. BIO will bring their expertise in the Krebs Cycle of frost giants to The Palace of the Vampire Queen Table, led by graduate-level Dungeon Master B. Dave Walters.

D&D veterans B. Dave Walters, Xander Jeanneret, Deborah Ann Woll, and Seth Green will improvise their way through a doomed campaign to hunt a massive monster with a challenge rating the size of the moon. Hosted by Bill Rehor and run by DM Jon Ciccolini, both from Beadle & Grimm’s, this one-hour session is unlikely to roll critical hits but sure to score critical laughs (unfortunately the monster has maxed comedy resistance).

The Wild Beyond the Witchlight is D&D's next big adventure storyline that brings the wicked whimsy of the Feywild to fifth edition for the first time. Tune into D&D Live 2021 for details including new characters, monsters, mechanics, and story hooks suitable for players of all ages and experience levels. 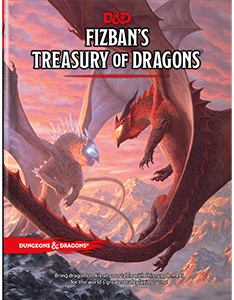 Meet Fizban the Fabulous: doddering archmage, unlikely hero of the War of the Lance, divine avatar of a dragon-god—and your guide to the mysteries of dragonkind in the worlds of Dungeons & Dragons. In Fizban's Treasury of Dragons, discover how dragons embody magic across the worlds of D&D and how you can bring them to life at your table in this quintessential reference guide for the world’s greatest roleplaying game. 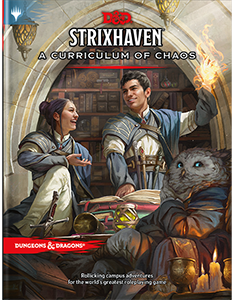 Strixhaven: A Curriculum of Chaos

The greatest minds in the multiverse meet at Strixhaven University. Professors convey fantastic secrets to eager students, and life on campus is frenetic. But danger lurks even here. Campus hijinks mix with mishaps and sinister plots, and it’s up to you to save the day. Strixhaven: A Curriculum of Chaos introduces the fantastical setting of Strixhaven University, drawn from the multiverse of Magic: The Gathering, and provides rules for creating characters who are students in one of its five colleges.

G4, the next-generation network created for gamers, by gamers. Authentic to its legendary roots, G4 returns in 2021 with classic shows and brand-new original content driven by a passion to entertain, unite and inspire gaming's enthusiastic and diverse communities. Based in Los Angeles and available everywhere gamers congregate, G4 is committed to bringing the industry together through content, commerce, and experiences that set a new standard for gaming innovation, inclusion, and accessibility. Reinvented by Spectacor Gaming, owner and operator of a growing portfolio of gaming and esports assets—including Overwatch League's Philadelphia Fusion and T1 Entertainment & Sports—G4 is also connected to and inspired by the technology and creativity of Comcast NBCUniversal. Please visit us at http://www.g4tv.com and find us on TikTok, Twitter, YouTube, Reddit, Twitch, Discord, and Instagram.

About Wizards of the Coast

Wizards of the Coast, a subsidiary of Hasbro, Inc., is an award-winning developer and publisher of tabletop and digital games that ignite a sense of adventure in passionate players around the globe. Best known for publishing groundbreaking fantasy franchises, MAGIC: THE GATHERING and DUNGEONS & DRAGONS, Wizards is dedicated to bringing together world-class talent to create unforgettable play experiences at its headquarters in Washington and studios in Austin and Montreal. Learn more at www.wizards.com.