A couple of months ago, a friend asked me if I’d teach him and his 6th-grade son how to play D&D. I’d been thinking for a while about playing with my own kids, so this seemed like a perfect opportunity.

After recruiting several other parent-and-kid combos, I set up a gaming night at my house, with a pool of players ranging from 2nd- to 6th-graders and their parents. Here’s how it went for me.

This might come as a shock, but not every kid wants to roll dice and slay goblins. In fact, one of those not-every-kids is none other than my own son. A couple of parents brought multiple kids, so I wasn’t surprised as things got going that my son and several of his fifth-grade friends just weren’t interested—as was also the case for a parent or two.

As a DM, it’s important to not take this personally. I told the players (kids and adults) that they were free to go play video games. What remained were two parents, a sixth-grader, a fifth-grader, an incredibly excited 2nd-grader, and my 2nd-grade daughter who just wanted to co-DM and roll the dice for me.

Because this was going to be the first time playing D&D for all the players, I wanted to run something I was familiar with so I could focus on different hooks to get them into the adventure. I opted for the Lost Mine of Phandelver adventure in the D&D Starter Set, having played it once or twice with coworkers.

Conveniently, the Starter Set also comes with a number of pregenerated characters. Though rolling up a character is great fun, I quickly realized that doing so would have taken up our whole first gaming session as I tried to help all the players create characters for the first time. It was important to get to the fun as fast as possible, and pregens are the best way to get everyone playing the game quickly.

As the players got ready, I went over possible character choices by focusing on play styles. For example, do you want to sneak in the shadows? Hit monsters with a sword up close, or shoot arrows from a distance? Cast magic spells? I focused on what type of heroes the players wanted to be, not on how much damage each class dealt or which race had the best features.

I did a really high-level overview of combat. Here’s a d20. On your character sheet, here’s the number you add to hit the monster. If you hit, here’s what you roll for damage. Here’s the number the monster needs to hit you. Here’s your health. For everything else, I just left it for explanation if and when it came up in the game. New players—kids and adults alike—often have short attention spans that don’t want or need a math lesson or a discussion of mechanics.

A player’s first time roleplaying can be awkward, so I quickly worked through the adventure background and right into the goblin ambush to get everyone focused on the game. Once the dice were rolling, the real fun began. The party encountered a goblin ambush that turned into a classic battle of heroic successes and humorous failures. I found that the key to keeping the players hooked was spinning good dice rolls into flavored descriptions and poor rolls into comedic moments. This made the players feel like action heroes in a movie.

For example, one of the parents decided to have a character jump from a ledge down onto a goblin below. I explained that there could be consequences for stumbling on this 20-foot jump, but the player went for it anyway—and rolled low, missing the goblin. Given a chance to land without harm, the character then failed a Dexterity save, so I got to describe how the hero plummeted to the ground and landed face-first at the goblin’s feet.

At this point, one of the kids decided to try the jumping trick to save the fallen character. This time, the roll was high and the second character crashed onto the goblin. As DM, I wanted to keep the action-hero feel going, so I told the player whose character was prone on the ground to make another Dexterity check. Another low roll, so I got to describe how the kid’s character crashed down onto the goblin, which crashed into the fallen hero—who wound up taking more damage from the ally than if the goblin had just attacked with its sword.

In the end, that moment in the ambush turned out to be a pivotal point in the game, with everyone laughing and engaged in the adventure. To try to hold onto that engagement, I kept the play session short and focused. We played for about an hour and a half before pizza arrived—at which point, we lost the bulk of the players to food and video games. That was okay, though, because that was all the time it took for the night to be a huge success.

Over subsequent sessions, that first game has evolved into semi-monthly game nights that have included a Magic: The Gathering mini-tournament and a few different board games. We keep coming back to D&D, though, and I hope to write more about our games in upcoming installments of Behind the Screens. 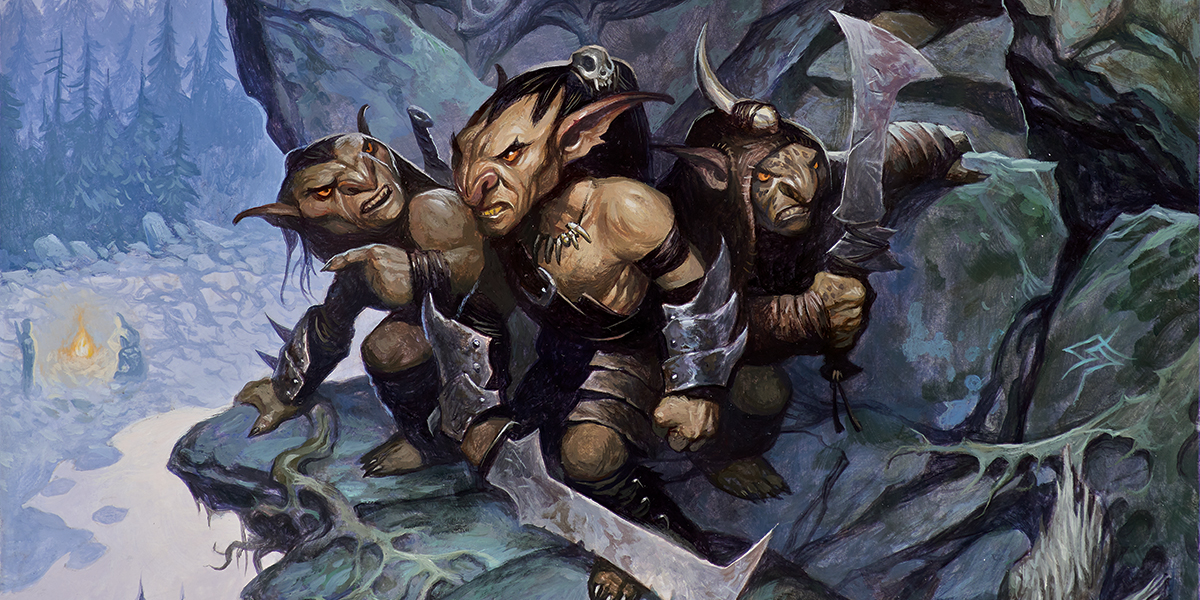 Tom Olsen is a senior game designer on the Dungeons & Dragons team, focusing primarily on digital projects. Tom has worked on multiple teams and projects, including D&D Insider, Magic: The Gathering Online, and various D&D licensed games, but is most proud of his work on Lords of Waterdeep for iOS.

Create your D&D Beyond account today, and start using the guided character builder. For Dungeon Masters, build and manage your campaigns with DM tools. All with official Dungeons & Dragons digital content!

Plus, sign up for the newsletter in order to get the latest info on Dungeons & Dragons products, events, and special offers—and help stay informed!

Create an Account
We use necessary cookies to allow our site to function correctly and collect anonymous session data. Necessary cookies can be opted out through your browser settings. We also use optional cookies to personalize content and ads, provide social medial features and analyze web traffic. By clicking “OK, I agree,” you consent to optional cookies. (Learn more about cookies)