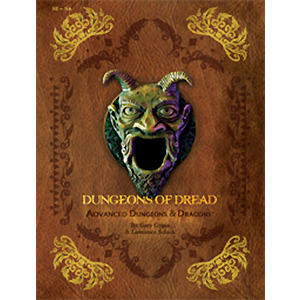 S1: Tomb of Horrors: In the far reaches of the world, under a lost and lonely hill, lies the sinister Tomb of Horrors. This labyrinthine crypt is filled with terrible traps, strange and ferocious monsters, rich and magical treasures, and somewhere within rest the evil Demi-Lich.

S2: White Plume Mountain: It has always been a subject of superstitious awe to the neighboring villagers. People still travel many miles to gaze upon this natural wonder, though few will approach it closely, as it is reputed to be the haunt of various demons and devils. The occasional disappearance of those who stray too close to the Plume reinforces this belief. Now, the former owners of Wave, Whelmand Blackrazor are outfitting a group of intrepid heroes to take up the challenge of recovering these magical weapons from White Plume Mountain.

S3: Expedition to the Barrier Peaks: From the preface by Gary Gygax: "This module was begun early in 1976 when TSR was contemplating publication of a science fantasy role playing game. Jim Ward had already shown us some rough notes on Metamorphosis Alpha I thought it would be a splendid idea to introduce Jim’s game at Origins II, and introduce the concept to D&DO players by means of the tournament scenario. I laid out the tournament from old “Greyhawk Castle” campaign material involving a spaceship, and Rob Kuntz helped me to populate the ruined vessel."

Get Started Basic Rules for D&D

Download the Basic Rules—a set of PDFs that covers the core of the tabletop game for players and DMs.

Download links to D&D character sheets -- for use in the game and D&D Adventurers League.