Into the Borderlands Original Adventures Reincarnated #1 By Goodman Games 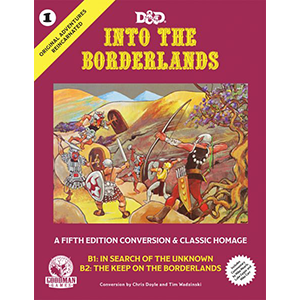 First Volume Contains B1 and B2 Converted to Fifth Edition, Plus Insider Commentary, and Original Art.

Goodman Games is pleased to announce a partnership with Dungeons & Dragons to publish deluxe collector’s editions of classic D&D adventure modules! These commemorative editions will appeal to fans of Dungeons & Dragons across multiple editions. Each volume will include digitally restored, high-quality scans of the original 1970’s-era adventure modules, presented in their original published form.

In addition, each volume will include a conversion of that original adventure to the fifth edition rules set. This format allows nostalgic gamers to re-live the adventures of their youth, and play those adventures again in a modern rules set! For gamers with families and children ready to receive the torch of gaming, this volume is the perfect format to share fond adventures with the next generation playing the Dungeon & Dragons fifth edition rules.

The first hardcover collector’s edition will include B1: In Search of the Unknown and B2: The Keep on the Borderlands. These classic adventure modules were played by millions of gamers in their original editions. Among other things, the book includes:

The deluxe hardcover volume is anticipated to be available at Gen Con with general release in September 2017. For additional information, visit Goodman Games online at goodman-games.com.

Best known for the Dungeon Crawl Classics Role Playing Game, Goodman Games has published more than 200 adventure modules over its 15 years in business.