Ashes of the Tyrant Brimstone Angels By Erin M. Evans 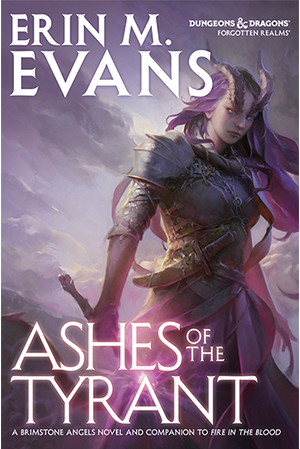 Following her fourth book in the Brimstone Angels series, Fire in the Blood, Erin M. Evans thrusts her signature character Farideh into a fast-paced murder mystery rife with political intrigue.

In the wake of the war brought on by the Sundering, Farideh’s adopted father Mehen has been called back by the clan that cast him out, and Farideh and Havilar mean to go with him. Just as Mehen confronts the head of his former clan, a clutch of young dragonborn is found in the catacombs, brutally murdered, an infernal summoning circle that looks all-too-familiar to Farideh, nearby.

“The Realms have gone through many changes in the past few years, but Erin Evans proves that its heart is still in the same place. Many writers set novels there; a few inhabit it. I get the impression Erin could draw you a map of Suzail as easily as she could direct you to the nearest Starbucks.”

“This book is an absolute joy to read . . . Fire in the Blood reads like a passion project, a love letter to both fans of the Forgotten Realms and fans of fantasy literature in general.”

Coverage of Ashes of the Tyrant