Recently, games journalist Jason Wilson visited the Wizards of the Coast offices to spend the day with the Dungeons & Dragons team.

Recently Jason Wilson (@jason_wilson) from Venture Beat visited the Wizards of the Coast office to spend the day with the Dungeons & Dragons team. During his visit, he was supposed to interview me (Nathan Stewart, Sr. Director of Dungeons & Dragons, @NathanBStewart), but I turned the tables on him and sprung a series of “well-crafted questions” (those were air quotes) his way. What’s good for the goose is good for the gander. Or, to quote a wise mage of the ’90s, George Costanza, I pulled “the ol’ switcheroo.” 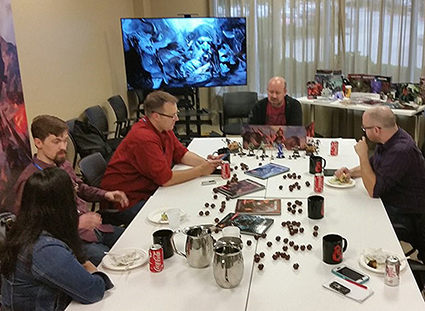 The interview started off simply enough. I greeted Jason and asked him to take a seat. I checked to make sure his coffee was topped off, then informed him that I had gone to the Internet earlier to get help with my questions. He was either ready or terrified; the two looks are strangely similar.

Here’s a list of the questions I pressed him with, and a detailed recap of our conversation…

How long have you been playing D&D?

Jason started playing in 1983. That was the year the TV series M*A*S*H went off the air, meaning he needed something new to fill that time slot. So why not a little Dungeons & Dragons? Jason describes himself as a “D&D player for life,” albeit a bit of a lapsed player (he’s currently only playing the Neverwinter MMORPG). But in response to my telling him that this absolutely counted as playing D&D, he acquiesced with the final answer: “I started playing in 1983, and plan to be a lifer.”

Roughly how many player characters have you had over the years?

Jason usually played the role of Dungeon Master, and although he’s done quite a bit of character creation for NPCs, he hasn’t had too many true PCs. Probably only five or six through the years.

What’s one of the coolest things one of your PCs has ever done?

Jason talked about playing in a game with two different characters—a priest and a fighter. Whenever the fighter died, the priest would cast animate dead so that they could both finish the adventure. Then they’d go to the next town and find someone to resurrect him.

(Especially given Jason’s description of himself as someone who doesn’t play too many characters, I thought this answer was great—or a plot to a potential new D&D sitcom. And don’t worry, legal team. I informed Jason that any awesome ideas shared while in the building became the property of Hasbro, and that he would be credited with “Special thanks to the many minions who made this possible.”)

If D&D were to become an Olympic sport, what would that event look like? (This was a fan-submitted question from the Internet, and I thought it was a great one. It also proved to be a challenge that really threw Jason for a loop . . .)

Although he didn’t have a specific answer, Jason did have some ideas about the competition. He knew it would be one of the slower-paced events at the Olympics. It would obviously be performed indoors, and the play environment would be a Geek Chic table, set up with painted minis and a panel of judges—Chris Perkins, Jeremy Crawford, and a third maybe-celebrity judge. Possibly Matt Mercer.

Knowing that you have kids, what’s your opinion as to the correct age for a child to first watch Star Wars? (And obviously, I mean starting with A New Hope, not Episode 1. And yes, it will be Machete Order.)

This proved to be an excellent question to ask, because Jason had already attempted this with one child at the age of four. His answer now is age six, and he has another child almost ready to take a second swing at this. As a geek dad, I think this is an important topic, and having brave dads go before me and sharing their wisdom is really helpful. I’m hoping my wife doesn’t read this, because Jason’s experience would suggest that she was right and I was wrong (based on our own conversation on the matter). But we shall see . . .

It has long been argued that The A-Team is a loose spinoff of Dungeons & Dragons. In your opinion, what would those characters’ classes be?

Jason started with the easiest, B.A. Baracus—a fighter. We could split hairs to push him toward barbarian or some other melee type, but let’s just agree—FIGHTER. He believed Face would be a bard, which makes sense (although I was thinking rogue myself, with a very high Charisma). John “Hannibal” Smith required a bit of discussion, which finally landed on a multiclass fighter/rogue with some sort of swashbuckler background (which sounds cool enough that it might just be my next character). The hardest one in my opinion was Murdock, but Jason confidently declared him to be a priest of Oghma.

For those of you that have other opinions, I’d love to know your breakdown.

What is your favorite thing we’ve done with the D&D franchise over the last four years?

As my final question, this proved the easiest for Jason to answer. “The Dungeon Masters Guild,” he said without hesitation.

For my first-ever reverse interview, I’m glad that Jason was willing to play along. I hope he enjoyed his visit to the office, because I sure had fun!