Across continents and oceans, the Sundering has come—and it's changing everything. To help tell the tale, Dungeons & Dragons is releasing its second Sundering video. And though we can't fully explain the whims of gods and the cataclysms of worlds, we can give you a behind-the-scenes view of how those videos came to be.

The big idea of introducing the story of the Sundering through video started in March of 2013. If you're not familiar with the Sundering, the express version runs like this:

The Forgotten Realms has endured one catastrophe after another, from the Time of Troubles through the Spellplague. Yet now the worlds of the Realms are sundering—tearing apart and reshaping again for the last time. Even the gods have been thrown into chaos, and they scramble now to grasp at power in hopes of cementing their positions in this strange new order. Their mortal agents, the Chosen, are charged with carrying out their will. Sir Isteval, a noble paladin, is calling heroes to tabletop roleplaying game adventures, store-based play programs, novels, accessories, and the first free-to-play D&D mobile game. Over the course of this story arc, players will help shape the future of Faerûn—and make their stories legend.

It's somewhat ironic that an epic tale of splitting apart could be built in a similarly epic effort of collaboration. Brian Amadon, Wizards' designer for new media, volunteered to take on the role of director. Like the start of many great D&D adventures, the first stages of the project presented an almost overwhelming range of possibilities but no clear sense of direction. "At this point," Brian says, "we had a lot of interest in the project but very few assets. What I did have was a slowly evolving vision of creating the pieces in digital 3D."

Making the decision to create the Sundering videos entirely in CGI (as opposed to live action or traditional animation) inspired Brian to meet with Dan Gelon, the Dungeons & Dragons digital art director at Wizards. As Brian describes it, "Dan had hundreds of screenshots of locations used in the Neverwinter trailers, and we started using those to select individual elements. We want those pillars, that door, those wolves, and so on."

Neverwinter is the massively popular, free-to-play action MMORPG set in the Forgotten Realms of Dungeons & Dragons. The game was developed for Wizards of the Coast by Cryptic Studios and released in June of 2013. "The people at Cryptic are amazing," says Brian, "and without those assets, the Sundering videos would have had to take an entirely different direction."

Next, Jon Schindehette directed Brian to "the two Nicks"—3D modelers Nick Isaac and Nick Bartolletti, who were working on a 3D model of Sir Isteval for Jon. "Up to this point," Brian says, "our leading man, Isteval, existed only as a 2D drawing. The original video was going to be pretty dark, as we thought we'd have to shroud a rough model in darkness. But when we found out about the model already in development, we knew we'd be able to take the videos to a whole new level." Isaac and Bartolletti fleshed out the armored paladin into a finely detailed, three-dimensional character.

Every character and every adventure needs a great setting. For Isteval, the hallway came first. Many of the building blocks for Isteval's temple came from the castle in Neverwinter, but those early similarities have been almost completely overwritten. After composing some initial hand-drawn sketches, Brian called in a frequent Wizards art freelancer, David Interdonato. As the two of them did some improvisational drawing of the space, the main hall became circular. They started sketching out the stained-glass windows, giving each pane a story. A storyboard was then laid down that integrated the audience's point of view. "We imagined the camera was alive," says Brian, "and tried to make its movements add to the emotional aspect of the story."

It was about this time that Wizards of the Coast hired a new video producer, Justin Bergeron. Along with his own history of playing D&D, Justin brought his extensive film experience to bear on the project. Prior to coming to Wizards, Justin worked with high-profile studios such as Lucasfilm and DreamWorks, and founded both Indie Ranch and HD Studios, providing start-to-finish HD production and consultation services to independent filmmakers.

This new and expanded team refined their ideas and pitched multiple concepts back to the people in D&D. Once they had a sign-off on the general direction, they pulled in another Wizards freelancer, copywriter Rob Lightner, to write the script. Justin described those early development sessions as, "a lot of fun. There was a lot of creativity flowing around the room, as we were really getting to build a story-driven piece. It was a labor of love."

Next week, in part 2 of this article, Vincent Kovar talks about finding the best production company for the Sundering videos, and how the Wizards of the Coast parking lot became a part of the creative process. 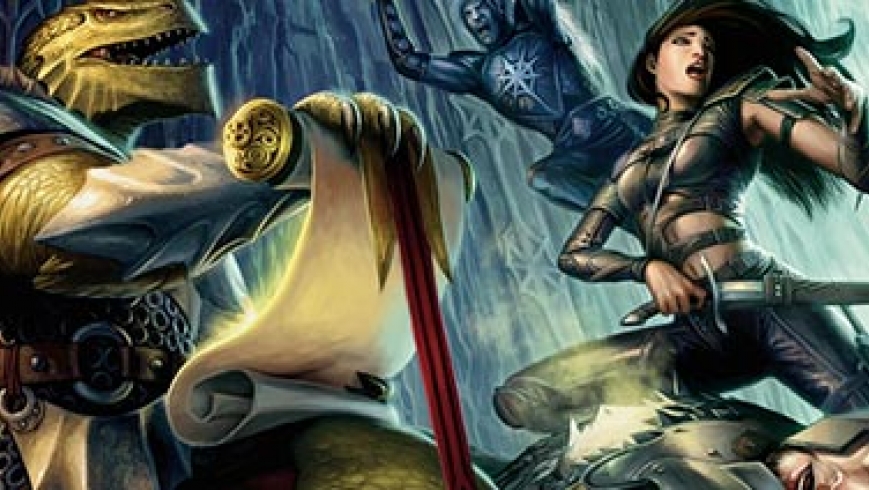 Part 1 : Making of the Sundering Videos

Across continents and oceans, the Sundering has come—and it's changing everything. To help tell the tale, Dungeons & Dragons is releasing its second Sundering video. And though we can't fully explain the whims of gods...