Kate Welch jumps in as special co-host this week with Shelly and the two break down all the news and happenings going on with D&D right now. PAX East, Monster Madness, Laeral Silverhand's Explorer's Kit, and why Greg Tito exclusively wears suits while not on Dragon Talk. Later, our very own Jeremy Crawford stumbles in the door for an intoxicating edition of Sage Advice on alcoholic beverages at your table and within your games. Our special guest this week is meteorologist for The Weather Network, Scott Sutherland!

00:00: Intro and news with Shelly Mazzanoble and Kate Welch 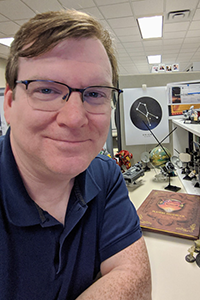 Scott Sutherland is a meteorologist and science writer for The Weather Network. There, he shares his enthusiasm for weather, astronomy and space, using writing and storytelling skills he honed over more than 40 years of playing Dungeons & Dragons.

Scott is an avid LEGO builder, and he has designed some innovative paper & cardstock terrain pieces for the campaigns he's played in over the years (including an astral sailing ship, Baba Yaga's Hut, & some really cool vehicles and set pieces for Gamma World!). He has even worked on writing projects with the legendary Gary Gygax!

As a meteorologist, Scott's passion for weather has looped back into his gaming. Partly, this is by contemplating a Tempest Cleric or a Storm Sorcerer for some future game, but also in thinking about how to use weather as a storytelling tool in campaign and adventure planning, and how it can act as both a boon and a bane to characters during encounters.