In our introductions and news, Greg and Shelly get you up to speed with the latest Eberron box set from Beadle & Grimm's Pandemonium Warehouse, Monster Madness, Laeral Silverhand's Explorer's Kit, and Baldur's Gate 3. Afterwards, Adam Lee joins us for a Lore You Should Know on the Anauroch desert. You'll know our special guest this week from such TV shows as The Dragon Prince, Avatar, Clone Wars, and King Of The Hill. Please enjoy animation director, writer and producer Giancarlo Volpe! 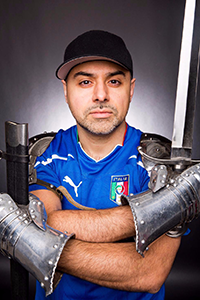 Giancarlo Volpe is an animation director, writer and producer who has worked in the animation industry for over twenty years. His directing credits include Avatar the Last Airbender, Star Wars: The Clone Wars, and Disney's Star Vs. The Forces of Evil. Giancarlo also served as showrunner on Green Lantern the Animated Series as well as Netflix's The Dragon Prince.

But most importantly, Giancarlo is an avid fan of Dungeons & Dragons and has been playing nearly his entire life! He has played all editions of the game (including 3.0 and 3.5) and has done more than his share of Dungeon Mastering, once infamously building a breakaway mountain/dragon's lair in his garage.