We’re back! Greg & Shelly recount all the excitement from D&D Live 2020 and go over the announcements made, including the new adventure, Icewind Dale: Rime Of The Frostmaiden available September 15th! Later in Lore You Should Know, Adam Lee joins us for a look at two specific deities of Theros, Kruphix and Pharika . Our special guest this week is game designer and writer, known for his work on Sina Una, Joshua Mendenhall! 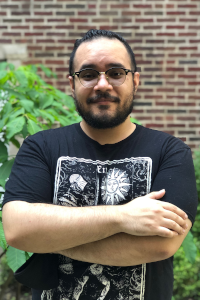 Joshua Mendenhall's life has always involved D&D in one way or another. From the stories his dad raised him on, to when he started playing at the age of ten, to his work today, there’s not a day that has passed where he hasn’t thought about storytelling and gaming. He now works as a game designer and writer, primarily as the Co-Director and Lead Designer for the Islands of Sina Una. He’s also the Brand Ambassador for Dungeon Fog, and enjoys working on writing and design with companies such as Beadle & Grimm’s, Swordsfall, Hit Point Press, and Metal Weave Games.

He's passionate about creating new experiences and ideas for people to explore and use to tell stories at their own tables.