Greg opens this weeks episode talking Mythic Odysseys Of Theros, which is out now and available everywhere! There is also an alternate cover version exclusively for sale at your local game stores which we’re all sure would love to have your support during this time! Ari Levitch returns for another Lore You Should Know, continuing our tour of the gods of Theros. This week we talk about Karametra. Our special guest this week is CEO of Dimensional Ink Games, Jack Emmert!

10:06: Lore You Should Know with Ari Levitch 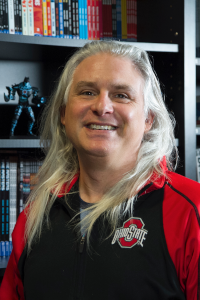 Jack Emmert has more than two decades of experience in the gaming industry as a studio lead and designer. Currently, Jack serves as CEO of Dimensional Ink Games (DIG), Daybreak Games’ Austin, TX based studio, which supports the genre-defining DC Universe™ Online and the development of a new action massively multiplayer online (MMO) game.

Like many game designers, Jack Emmert got his start with traditional RPGs. He designed tabletop RPGs before transitioning to the build out of MMOs. First, he started in the Superhero genre and then moved toward the Dungeons and Dragons based adventure, Neverwinter, as the former head of Cryptic Studios. During his time at Cryptic, Jack also led the development and design of the critically acclaimed MMORPGs City of Heroes (2004), City of Villains (2005), Champions Online (2009) and Star Trek Online (2010).

Since his teenage years, Jack has been playing Advanced D&D, first as a wizard (name LONG since forgotten), then segueing into his role as a Dungeon Master. Jack takes his role as DM seriously, feeling it’s key to connect directly with players. He believes the tough part is keeping one step ahead of the party and fluidly responding to where they’re taking the story. It’s easy to railroad the players, but it’s not fun for the group.

Jack is still an avid fan of tabletop games and owns hundreds of dice, some of which have failed him and some of which have delivered that vital saving throw. Jack does craft his own miniatures, but admits he’s only an “average” painter.