Greg & Shelly get you up to speed with the D&D Holiday Specials, Heroes' Feast, D&D news, and the announcement of the forthcoming Dragon Talk book! Afterwards, Adam Lee returns for another Lore You Should Know, this week talking about the subclasses of Psi Warriors and Warlock Genie Patrons. For this week’s special interview, we are thrilled to be joined by actress, internet personality, and content creator Jasmine Bhullar. 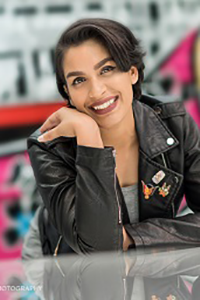 Jasmine "ThatBronzeGirl" Bhullar is an actress, internet personality, and content creator best known for her daily livestreams on twitch as well as the many role play productions she has been a part of. She is not only an experienced tabletop RPG player, but a skilled Game Master as well. She got her start on Geek and Sundry by writing and GMing the Starter Kit for Vampire the Masquerade which led to her playing the infamous Beryl the Brutal on Relics and Rarities. She's also guested on Critical Role's DOOM crossover and plays Betty on World of Darkness's official Seattle by Night game. Jasmine enjoys creating video game, roleplay, and comic book content when she doesn't have her head in a science fiction book.