Greg & Shelly announce the release of Monster Madness! This new expansion for Dungeon Mayhem includes six new decks and is heading your way this Valentine's Day! Later, we welcome back D&D editor Wes Schneider for another edition of How To DM. This week we talk about how to use the players at your table as assets. Our special interview guest this week is Emmy and Golden Globe nominated director, writer, and animator Jorge Gutierrez.

Dragon Talk: Jorge Gutierrez & How To DM with Wes Schneider 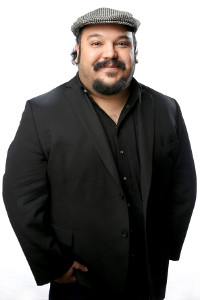 Jorge Gutierrez is the director and co-writer of the Golden Globe nominated feature "The Book of Life" for 20th Century Fox, writer director of the Emmy nominated "Son of Jaguar" VR short for Google, and creator (with muse and wife Sandra Equihua) of the multiple Emmy winning animated series "El Tigre, The Adventures of Manny Rivera" for Nickelodeon.

He is currently writing and directing an epic fantasy movie-series called "Maya And The Three" for Netflix. He started playing D&D about two years ago and it's changed how he writes and world-builds.