Greg congratulates Shelly on her twenty (!!!) years at D&D and discuss why that's a better career choice than selling hand soap or manufacturing salt. In our latest installment of How To DM, we welcome in D&D editor Wes Schneider for a breakdown of running a session zero and how that can help your game. Our special guest this week is the creator of Syrinscape, Benjamin Loomes.

Dragon Talk: Benjamin Loomes & How To DM with Wes Schneider 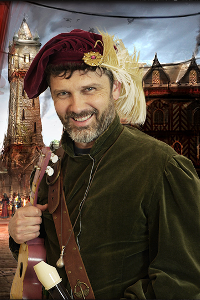 Benjamin Loomes is the CEO/Creative Director of Syrinscape. As an accomplished pianist, singer and composer, he has created a large number of instrumental and vocal works, including two operas which premiered in Sydney, Australia.

His passion for tabletop games began decades ago when, as a 10 year old, he was given the 1st Edition Dungeons and Dragons Redbox. Benjamin’s creative talent, combined with his lifelong love of social gaming has driven him to build something which is changing people's gaming experience. The evocative moods of Syrinscape, from friendly taverns to dungeon depths, help to immerse players in the moment. As Benjamin always says, "Epic games need epic sounds!"