Not only can fans around the world watch all the excitement unfold on twitch.tv/dnd, but you can now buy tickets to come take a tour of the studio’s sets on Sunday, June 3, get D&D merchandise you can’t get anywhere else, and watch your favorite entertainers play D&D live in the studio!

Be There in Person

On Sunday, June 3, fans who buy tickets will get an exclusive tour of the sets, a bag of D&D merchandise, and a seat in the live studio audience to watch some of your favorite streamers play D&D. There are four groups performing on Sunday, including members of Critical Role, High Rollers, Force Grey and the entire cast of Dice, Camera, Action! Gourmet food trucks, a D&D pop-up store full of merch, and live performances from musicians, dancers and stunt-people will keep the atmosphere downright jovial before the scheduled tours begin. On the tour of the sets, you’ll get to interact with characters, authors and luminaries from some of the brands who work with Dungeons & Dragons.

Tickets are $200 each for this unique experience you can’t get anywhere else, including a bag full of D&D merchandise. Check out the schedule and how to buy tickets below. There aren’t a lot of tickets available, so if you’re in the L.A. area make sure to grab them quick!

Please arrive 15 minutes prior to event start time. Attendees must have a valid for of ID to enter. All guests must be 18 years or older. 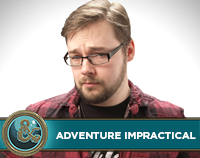 Join D&D at the Stream of Many Eyes (June 3, 10am-1pm PT; livestream starts at 11am). Take an exclusive tour of the streets of the Forgotten Realms and watch The Yogscast’s Mark Hulmes, voice-over actor and YouTube creator, brings his love for action/adventure movies to the gaming table for a live 90-minute D&D adventure; including special guests Matthew Lillard, plus Critical Role's Taliesin Jaffe, Sam Riegel, and Ashley Johnson!

Buy Tickets (includes bag of D&D merch and a seat in the live studio audience): Mark Hulmes is the Dungeon Master for Europe's largest D&D Livestream, HighRollers, which is hosted on the Yogscast Twitch and has worked with Wizards of the Coast previously on the Stream of Annihilation, Uncharted Territory and Dead Reckoning. Mark also has his own YouTube Channel, Tabletop Weekly which features a regular podcast as well as gameplay videos and more. Taliesin Jaffe began his career as a child actor appearing in films such as Mr. Mom, 2010 and Explorers, and television series including The Facts of Life, St. Elsewhere, and She’s the Sheriff. Since then he has worked as an ADR director for projects such as Hellsing, BECK, Romeo X Juliet, Street Fighter IV, and Ultimate Marvel vs. Capcom 3. He has also worked as a voice actor, lending his voice to characters such as Blanka in Street Fighter, Darion Mograine in World of Warcraft, Thancred in Final Fantasy XIV, and Basil Hawkins in One Piece to name just a few. Taliesin has recently played Ga’nar in Lords of War and The Flash in Injustice 2. Currently you can watch him Wednesdays on The Wednesday Club.

You can also find him every Thursday on Critical Role, where a group of nerdy-ass voice actors play D&D for an audience of millions. You can catch his exploits with Vox Machina as the human gunslinger, Lord Percival Fredrickstein Von Musel Klossowski de Rolo III (also known as Percy)—or with the Mighty Nein as Mollymauk Tealeaf, the tiefling blood hunter. Sam also serves as voice director for Disney’s DuckTales, Sofia The First, Pickle & Peanut, Elena of Avalor, and Fancy Nancy, as well as Danger & Eggs for Amazon and Unikitty! for Cartoon Network. Sam occasionally co-hosts a drunken podcast with Liam O’Brien called All Work No Play.

You can also find him every Thursday on Critical Role, where a group of nerdy-ass voice actors play D&D for an audience of millions. You can catch his exploits with Vox Machina as the half-elf gnome bard, Scanlan Shorthalt—or with the Mighty Nein as Nott the Brave, the goblin rogue. Ashley Johnson started her career at a very young age and has continued to work as a film, television and voice actor. Her various television roles include Growing Pains, Dollhouse, Dirt, The Killing and Drunk History, as well as the films, What Women Want, Fast Food Nation, Avengers, Joss Whedon’s Much Ado About Nothing and The Help. She’s worked on many animation series, including Recess, King of the Hill, Gwen on Ben 10 Alien Force, Terra on Teen Titans and Renet on Teenage Mutant Ninja Turtles. As for her video game roles, you can hear her as Petra in Minecraft: Storymode, Gerti in Tales from the Borderlands, The Witness, LEGO Marvel’s Avengers and The Last Of Us, in which she won two BAFTA awards for her portrayal as Ellie.

You can find her every Thursday on Critical Role, where a group of nerdy-ass voice actors play D&D for an audience of millions. You can catch her exploits with Vox Machina as the Gnome Cleric, Pike Trickfoot—or with the Mighty Nein as Yasha Nydoorin, a Fallen Aasimar Barbarian.